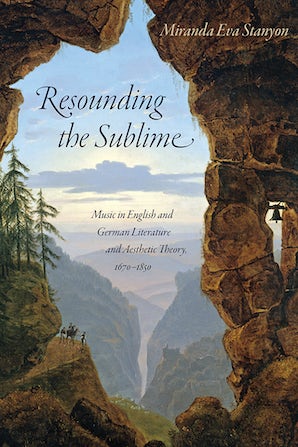 Music in English and German Literature and Aesthetic Theory, 1670-1850

What does the sublime sound like? Harmonious, discordant, noisy, rustling, silent? Miranda Eva Stanyon rereads and resounds this crucial aesthetic category in English and German literatures of the long eighteenth century from a musical perspective and shows how sonorous sublimes lay at the heart of a central and transformative discourse. For Enlightenment and Romantic era listeners, the musical sublime represented a sonic encounter of the most extreme kind, one that tested what humans were capable of feeling, imagining, thinking, and therefore becoming.

The sublime and music have not always sung from the same hymn sheet, Stanyon observes. She charts an antagonistic intimacy between the two, from the sublime's rise to prominence in the later seventeenth century, through the upheavals associated with Kant in the late eighteenth century, and their reverberations in the nineteenth. Offering readings of canonical texts by Longinus, Dryden, Burke, Klopstock, Herder, Coleridge, De Quincey, and others alongside lesser-known figures, she shows how the literary sublime was inextricable from musical culture, from folksongs and ballads to psalmody, polychoral sacred music, and opera. Deeply interdisciplinary, Resounding the Sublime draws literature into dialogue with sound studies, musicology, and intellectual and cultural history to offer new perspectives on the sublime as a phenomenon which crossed media, disciplines, and cultures.

An interdisciplinary study of sound in history, the book recovers varieties of the sublime crucial for understanding both the period it covers and the genealogy of modern and postmodern aesthetic discourses. In resounding the sublime, Stanyon reveals a phenomenon which was always already resonant. The sublime emerges not only as the aesthetic of the violently powerful, a-rational, or unrepresentable, but as a variegated discourse with competing dissonant, harmonious, rustling, noisy, and silent strains, one in which music and sound illustrate deep divisions over issues of power, reason, and representation.

Part I. He Rais'd a Mortal to the Skies; She Drew an Angel Down: English Literature, Circa 1670-1760
Chapter 1. Music as a "Bastard Imitation of Persuasion"? Power and Legitimacy in Dryden and Dennis
Chapter 2. "What Passion Cannot Musick Raise and Quell!" Passionate and Dispassionate Sublimity with the
Hillarians and Handelians

Part III. Sublime Beauty and the Wrath of the Organ: English and German Literature, Circa 1770-1850
Chapter 5. The Beauty of the Infinite: Herder's Sublimely-Beautiful, Beautifully-Sublime Music
Chapter 6. The Terror of the Infinite: Thomas De Quincey's Reverberations