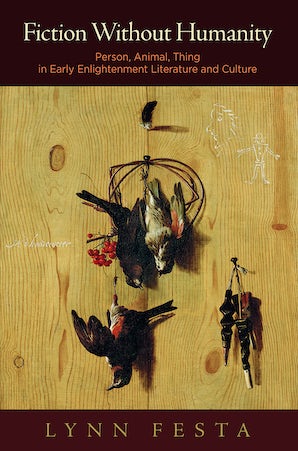 Although the Enlightenment is often associated with the emergence of human rights and humanitarian sensibility, "humanity" is an elusive category in the literary, philosophical, scientific, and political writings of the period. Fiction Without Humanity offers a literary history of late seventeenth- and early eighteenth-century efforts to define the human. Focusing on the shifting terms in which human difference from animals, things, and machines was expressed, Lynn Festa argues that writers and artists treated humanity as an indefinite class, which needed to be called into being through literature and the arts.

Drawing on an array of literary, scientific, artistic, and philosophical devices— the riddle, the fable, the microscope, the novel, and trompe l'oeil and still-life painting— Fiction Without Humanity focuses on experiments with the perspectives of nonhuman creatures and inanimate things. Rather than deriving species membership from sympathetic identification or likeness to a fixed template, early Enlightenment writers and artists grounded humanity in the enactment of capacities (reason, speech, educability) that distinguish humans from other creatures, generating a performative model of humanity capacious enough to accommodate broader claims to human rights.

In addressing genres typically excluded from canonical literary histories, Fiction Without Humanity offers an alternative account of the rise of the novel, showing how these early experiments with nonhuman perspectives helped generate novelistic techniques for the representation of consciousness. By placing the novel in a genealogy that embraces paintings, riddles, scientific plates, and fables, Festa shows realism to issue less from mimetic exactitude than from the tailoring of the represented world to a distinctively human point of view.

"Fiction without Humanity is a dauntingly learned book, in which Lynn Festa deploys and contributes to such diverse fields as thing theory, animal studies, art history, the history of science, folklore, rhetoric and grammar, and Peircean semiotics.""—Eighteenth Century Fiction

"Fiction Without Humanity is a profound book that tenders as many pleasures as Pope or Swift as it dances between empirical minima (fleas, flies, personal pronouns, unmatched shoes) and concepts and questions that remain urgent today: Just what makes a thing count as human? How does literary form participate in this accounting? What, specifically, does literature do to, with, for us humans? Lynn Festa has written a posthumanist classic-albeit one that returns us to a new and more demanding humanity."—Jayne Lewis, author of Air's Appearance: Literary Atmosphere in British Fiction, 1660-1794

"With its critical attention to such things as birds, insects, paintings, scientific engravings, riddles, fables, and Robinson Crusoe's island, Fiction Without Humanity offers an ambitious and persuasive account of the meaning of 'humanity'-and humanity's fictions-from radically other points of view. This book marks a bracing and mobilizing intervention in eighteenth-century eco-criticism as well as the environmental humanities more generally."—Helen Thompson, author of Fictional Matter: Empiricism, Corpuscles, and the Novel