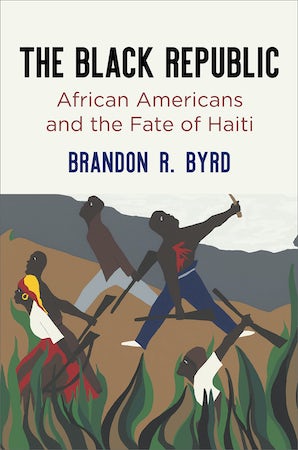 African Americans and the Fate of Haiti

In The Black Republic, Brandon R. Byrd explores the ambivalent attitudes that African American leaders in the post-Civil War era held toward Haiti, the first and only black republic in the Western Hemisphere. Following emancipation, African American leaders of all kinds—politicians, journalists, ministers, writers, educators, artists, and diplomats—identified new and urgent connections with Haiti, a nation long understood as an example of black self-determination. They celebrated not only its diplomatic recognition by the United States but also the renewed relevance of the Haitian Revolution.

While a number of African American leaders defended the sovereignty of a black republic whose fate they saw as intertwined with their own, others expressed concern over Haiti's fitness as a model black republic, scrutinizing whether the nation truly reflected the "civilized" progress of the black race. Influenced by the imperialist rhetoric of their day, many African Americans across the political spectrum espoused a politics of racial uplift, taking responsibility for the "improvement" of Haitian education, politics, culture, and society. They considered Haiti an uncertain experiment in black self-governance: it might succeed and vindicate the capabilities of African Americans demanding their own right to self-determination or it might fail and condemn the black diasporic population to second-class status for the foreseeable future.

When the United States military occupied Haiti in 1915, it created a crisis for W. E. B. Du Bois and other black activists and intellectuals who had long grappled with the meaning of Haitian independence. The resulting demand for and idea of a liberated Haiti became a cornerstone of the anticapitalist, anticolonial, and antiracist radical black internationalism that flourished between World War I and World War II. Spanning the Reconstruction, post-Reconstruction, and Jim Crow eras, The Black Republic recovers a crucial and overlooked chapter of African American internationalism and political thought.

Prologue
Introduction. The Ideas of Haiti and Black Internationalism
Chapter 1. Emancipation, Reconstruction, and the Quandary of Haiti
Chapter 2. The Reinventions of Haiti After Reconstruction
Chapter 3. The Vexing Inspiration of Haiti in the Age of Imperialism and Jim Crow
Chapter 4. Haiti, the Negro Problem, and the Transnational Politics of Racial Uplift
Chapter 5. W. E. B. Du Bois, the Occupation, and Radical Black Internationalism
Epilogue

"Byrd reinterprets intellectual history by placing Haiti at the centre of the Black Atlantic’s freedom dreams. Though scholars suggest that Haiti was fertile ground for Black thinkers to nurture ideas about self-determination, Byrd guides us through their imagined garden, exposing its lushness during the oft-overlooked post-emancipation period. This gorgeously written and rigorously researched text makes an indispensable contribution to Black history and will transform how intellectual historians engage with the Black Atlantic."—American Nineteenth Century History

"[D]eep and elegant . . . Byrd fills a signiflcant gap in scholarship by focusing on the relationship of Haiti and the U.S. during emancipation, Reconstruction, and the establishment of Jim Crow . . . Byrd's argument is striking and sound. His book reminds readers that American identity has always been bound up, for better or worse, with the fate of its neighbors."—Anglican and Episcopal History

"Brandon Byrd's examination of African Americans' concern with Haiti during the years from the US Civil War to the start of the occupation fills an important gap in scholarship. Using materials ranging from diplomatic archives to plays and public celebrations, Byrd shows the many ways in which black Americans imagined the Caribbean republic as their own status changed, from the hopes of the Reconstruction period to the increasingly difficult conditions of the Jim Crow era. He also convincingly demonstrates that any history of US foreign relations during this period needs to take the opinions and actions of African Americans into account."—H-DIPLO

"An innovative intellectual history of black possibility, The Black Republic wonderfully recovers a forgotten period in American history when the future of the world was unknown and Haiti loomed over the political visions of white supremacists and black revolutionaries alike. Brandon R. Byrd demonstrates how merely the idea of Haiti has long been central to the Western political imagination-as a litmus test for black self-determination, a warning about the dangers of Negro rule, or as a crossroads for America's imperial ambitions."—Davarian L. Baldwin, author of Chicago's New Negroes: Modernity, the Great Migration, and Black Urban Life

"In this extraordinary book, Brandon R. Byrd both rewrites the history of Black internationalism, locating Haiti firmly at its center, and offers a refreshingly nuanced reconsideration of the many ways that US African Americans engaged with the 'Black Republic' after the American Civil War."—Marlene L. Daut, author of Baron de Vastey and the Origins of Black Atlantic Humanism

"Brandon R. Byrd tracks the history of an idea, possibly even an aspiration, of how Haiti haunted African American political thought in myriad ways, while also demonstrating the vexed relationship various U.S. black thinkers had with the first black independent republic. The Black Republic will prove an invaluable work of scholarship that will transform how historians and scholars more generally approach black political thought and black intellectual life."—Minkah Makalani, author of In the Cause of Freedom: Radical Black Internationalism from Harlem to London, 1917-1939