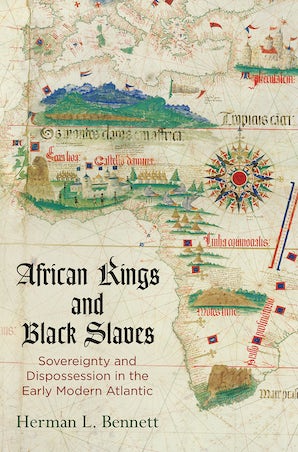 Sovereignty and Dispossession in the Early Modern Atlantic

A thought-provoking reappraisal of the first European encounters with Africa

As early as 1441, and well before other European countries encountered Africa, small Portuguese and Spanish trading vessels were plying the coast of West Africa, where they conducted business with African kingdoms that possessed significant territory and power. In the process, Iberians developed an understanding of Africa's political landscape in which they recognized specific sovereigns, plotted the extent and nature of their polities, and grouped subjects according to their ruler.

In African Kings and Black Slaves, Herman L. Bennett mines the historical archives of Europe and Africa to reinterpret the first century of sustained African-European interaction. These encounters were not simple economic transactions. Rather, according to Bennett, they involved clashing understandings of diplomacy, sovereignty, and politics. Bennett unearths the ways in which Africa's kings required Iberian traders to participate in elaborate diplomatic rituals, establish treaties, and negotiate trade practices with autonomous territories. And he shows how Iberians based their interpretations of African sovereignty on medieval European political precepts grounded in Roman civil and canon law. In the eyes of Iberians, the extent to which Africa's polities conformed to these norms played a significant role in determining who was, and who was not, a sovereign people—a judgment that shaped who could legitimately be enslaved.

Through an examination of early modern African-European encounters, African Kings and Black Slaves offers a reappraisal of the dominant depiction of these exchanges as being solely mediated through the slave trade and racial difference. By asking in what manner did Europeans and Africans configure sovereignty, polities, and subject status, Bennett offers a new depiction of the diasporic identities that had implications for slaves' experiences in the Americas.

"At the core of Bennett's book is the argument that the fierce competition between Portugal and Spain over the African Atlantic, which was significantly mediated by the Church, was crucial to the creation of the modern nation-state and of what became modern European nationalism. Early national identities in Europe were forged, to a substantial extent, on the basis of competition over trade and influence in Africa. And this, Bennett says, gets completely lost in Western histories that fast-forward from the conquest of the Canary Islands to Columbus's arrival in the Americas."—New York Review of Books

"Bennett engages a wide historiography and offers new perspectives on early Atlantic legal culture, political and religious authority, pageantry, and slavery. Bennett complicates the narrative that Europeans rendered Africans into property and capital through Roman law and Christian theology . . . .African Kings and Black Slaves is one of the boldest and most successful attempts yet to engage the fields of African studies, history, and critical theory equally."—Hispanic American Historical Review

"African Kings and Black Slaves is an impressive work that fundamentally challenges current understandings of slavery, empire and modernity, and will likely be the cornerstone of a new body of scholarship it invites."—Bulletin of Spanish Studies

"The book is short but packed with Bennett's analyses of the work of previous and current theorists and scholars. His judgments are acute, and . . . [h]e examines a prodigious amount of theory, using those parts of the corpus and the arguments that are pertinent and demolishing those he deems mistaken or misleading . . . The book is a major accomplishment and a testament to Bennett's wide reading. All those working on Atlantic slavery will need to take it into account."—Renaissance Quarterly

"An immensely thought-provoking book. In his sophisticated reconsideration of late-medieval European characterizations of sub-Saharan Africans, Herman L. Bennett troubles the traditional account of the rise of the West."—David Wheat, Michigan State University

"Herman L. Bennett's indispensable study alerts us to the political and intellectual consequences of flattening the history of Europe's relations with Africa by overlooking the Iberian experience. He ably shows how recuperating the notion of African sovereignty, abundantly recognized in early exchanges, can fundamentally change our understanding of African polities and African subjects."—Barbara Fuchs, University of California, Los Angeles

"African Kings and Black Slaves centers the histories of peoples of African descent in the grand tale of imperial conquest and power and thereby challenges the dominant narrative that colonial slavery has timelessly been about freedom. Herman Bennett is especially sensitive to the multisited nature of the contests set in motion by colonial encounters."—Antoinette Burton, University of Illinois at Urbana-Champaign