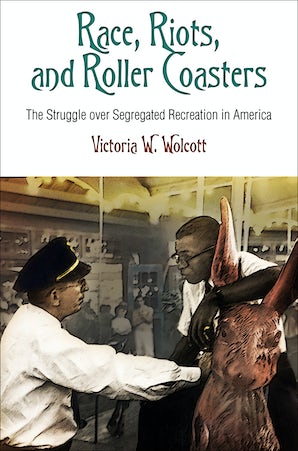 The Struggle over Segregated Recreation in America

Throughout the twentieth century, African Americans challenged segregation at amusement parks, swimming pools, and skating rinks not only in pursuit of pleasure but as part of a wider struggle for racial equality. Well before the Montgomery bus boycott, mothers led their children into segregated amusement parks, teenagers congregated at forbidden swimming pools, and church groups picnicked at white-only parks. But too often white mobs attacked those who dared to transgress racial norms. In Race, Riots, and Roller Coasters, Victoria W. Wolcott tells the story of this battle for access to leisure space in cities all over the United States.

Contradicting the nostalgic image of urban leisure venues as democratic spaces, Wolcott reveals that racial segregation was crucial to their appeal. Parks, pools, and playgrounds offered city dwellers room to exercise, relax, and escape urban cares. These gathering spots also gave young people the opportunity to mingle, flirt, and dance. As cities grew more diverse, these social forms of fun prompted white insistence on racially exclusive recreation. Wolcott shows how black activists and ordinary people fought such infringements on their right to access public leisure. In the face of violence and intimidation, they swam at white-only beaches, boycotted discriminatory roller rinks, and picketed Jim Crow amusement parks. When African Americans demanded inclusive public recreational facilities, white consumers abandoned those places. Many parks closed or privatized within a decade of desegregation. Wolcott's book tracks the decline of the urban amusement park and the simultaneous rise of the suburban theme park, reframing these shifts within the civil rights context.

"History professor Wolcott recounts a staggering litany of large and small-scale protests and riots at recreational facilities across the United States from the 1930s through the 1960s. Wolcott aims to make the case that the struggle to desegregate recreational facilities is an often overlooked but essential facet of the American Civil Rights narrative. . . . Together the stories reveal a national pattern of White violence against protestors and illuminate the shameful tactics employed by recreation facility owners to subvert the growing demand for desegregation."—Publishers Weekly

"The expansion of civil rights in recreational spaces is essential to understanding the civil rights movement of America, but it is not only a narrative of violence against African Americans either to sustain segregation or to admit integration. Wolcott's work adds a much-needed chapter to both civil rights and leisure histories, while it carefully avoids incorporating the very black cultural institutions before World War II that were central to African American participation in modernist identities and part of postwar integrationist advocacy."—American Historical Review

"Race, Riots, and Roller Coasters is a significant contribution to the growing corpus that attempts to rethink the traditional contours of the civil rights movement. Uncovering the neglected struggle over public amusements, Wolcott deepens our understanding of the relationship between civil rights, urban history, and popular culture in twentieth-century America."—Journal of American Culture

"Drawing on an array of sources, Race, Riots, and Roller Coasters makes an important contribution to the history of the civil rights movement by significantly expanding our understanding of the hardships black Americans faced to desegregate public recreational spaces, including amusement parks, swimming pools, and skating rinks."—Journal of Southern History

"Victoria Wolcott's well-written and deeply researched new book adds another crucial layer to the civil rights narrative. She goes beyond the familiar marches and leaders to focus on movie theaters, skating rinks, dance halls, city parks, amusement parks, and swimming pools as places of struggle. In doing so, she brings in a new cast of characters-children, teenagers, mothers-and shows how the battles over access to urban leisure predate Brown and extend well past the March on Washington. No one has identified and chronicled the conflicts in these places with the care and precision that Wolcott has."—Bryant Simon, author of Boardwalk of Dreams: Atlantic City and the Fate of Urban America

"In this powerful story, Victoria Wolcott demonstrates why recreation is central to understanding the history of the civil rights movement in America. Her book also asks us to push the existing frontiers of our historical memory-why violence against African Americans in order to sustain segregation has been forgotten, while violence that sometimes accompanied integration is remembered. With Race, Riots, and Roller Coasters, we reexamine more closely both the ideals and nightmares of America in the twentieth century."—Alison Isenberg, Princeton