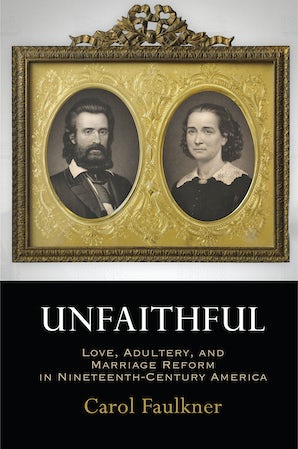 In her 1855 fictionalized autobiography, Mary Gove Nichols told the story of her emancipation from her first unhappy marriage, during which her husband controlled her body, her labor, and her daughter. Rather than the more familiar metaphor of prostitution, Nichols used adultery to define loveless marriages as a betrayal of the self, a consequence far more serious than the violation of a legal contract. Nichols was not alone. In Unfaithful, Carol Faulkner places this view of adultery at the center of nineteenth-century efforts to redefine marriage as a voluntary relationship in which love alone determined fidelity.

After the Revolution, Americans understood adultery as a sin against God and a crime against the people. A betrayal of marriage vows, adultery was a cause for divorce in most states as well as a basis for civil suits. Faulkner depicts an array of nineteenth-century social reformers who challenged the restrictive legal institution of marriage, redefining adultery as a matter of individual choice and love. She traces the beginning of this redefinition of adultery to the evangelical ferment of the 1830s and 1840s, when perfectionists like John Humphrey Noyes, founder of the Oneida Community, concluded that marriage obstructed the individual's relationship to God. In the 1840s and 1850s, spiritualist, feminist, and free love critics of marriage fueled a growing debate over adultery and marriage by emphasizing true love and consent. After the Civil War, activists turned the act of adultery into a form of civil disobedience, culminating in Victoria Woodhull's publicly charging the Reverend Henry Ward Beecher with marital infidelity.

Unfaithful explores how nineteenth-century reformers mobilized both the metaphor and the act of adultery to redefine marriage between 1830 and 1880 and the ways in which their criticisms of the legal institution contributed to a larger transformation of marital and gender relations that continues to this day.

"[A] compelling and original history...Faulkner’s important argument and her useful, detailed accounts of compelling archival materials makes Unfaithful a welcome contribution to the study of women’s history and social reform movements in the nineteenth-century US. Indeed, her keen sense of the connections that marriage reformers had with other important social reform movements of the time, including abolitionism, communitarianism, and women’s suffrage, open many opportunities for future scholarship on the intersections of activism then and now."—American Literary History

"Faulkner’s Unfaithful is an engaging work, a compelling narrative replete with a colourful cast of characters. It does many things well, and scholars of the nineteenth century, particularly those who study gender, the law, and reform movements, will find it to be an important addition to their bookshelves…an important addition to current scholarship, enriching our understanding of long-studied nineteenth-century reform movements and the history of American marriage more broadly."—American Nineteenth Century History

"Unfaithful engagingly focuses on a set of progressives bent on delegitimizing loveless marriages at a time when lifelong indissoluble marriage was the deep-rooted norm. Carol Faulkner unearths a wealth of new detail about the personal lives of individuals struggling to recast patriarchy in intimate life and to promote new values of choice, love, and women's autonomy in the sexual realm."—Patricia Cline Cohen, University of California, Santa Barbara