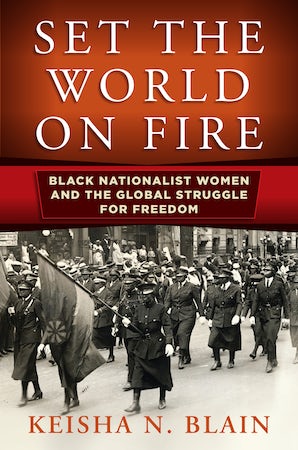 Set the World on Fire

Black Nationalist Women and the Global Struggle for Freedom

In 1932, Mittie Maude Lena Gordon spoke to a crowd of black Chicagoans at the old Jack Johnson boxing ring, rallying their support for emigration to West Africa. In 1937, Celia Jane Allen traveled to Jim Crow Mississippi to organize rural black workers around black nationalist causes. In the late 1940s, from her home in Kingston, Jamaica, Amy Jacques Garvey launched an extensive letter-writing campaign to defend the Greater Liberia Bill, which would relocate 13 million black Americans to West Africa.

Gordon, Allen, and Jacques Garvey—as well as Maymie De Mena, Ethel Collins, Amy Ashwood, and Ethel Waddell—are part of an overlooked and understudied group of black women who take center stage in Set the World on Fire, the first book to examine how black nationalist women engaged in national and global politics from the early twentieth century to the 1960s. Historians of the era generally portray the period between the Garvey movement of the 1920s and the Black Power movement of the 1960s as one of declining black nationalist activism, but Keisha N. Blain reframes the Great Depression, World War II, and the early Cold War as significant eras of black nationalist—and particularly, black nationalist women's—ferment.

In Chicago, Harlem, and the Mississippi Delta, from Britain to Jamaica, these women built alliances with people of color around the globe, agitating for the rights and liberation of black people in the United States and across the African diaspora. As pragmatic activists, they employed multiple protest strategies and tactics, combined numerous religious and political ideologies, and forged unlikely alliances in their struggles for freedom. Drawing on a variety of previously untapped sources, including newspapers, government records, songs, and poetry, Set the World on Fire highlights the flexibility, adaptability, and experimentation of black women leaders who demanded equal recognition and participation in global civil society.

Keisha N. Blain is Professor of History and Africana Studies at Brown University.

"Blain illuminates an oft-ignored period of black nationalist and internationalist activism in the U.S.: the Great Depression, World War II, and early Cold War. Her engrossing study shows that much of this activism was led by African-American and Afro-Caribbean women. . . . Adding essential chapters to the story of this movement, Blain expands current understanding of the central roles played by female activists at home and overseas."—Publishers Weekly (starred review)

"In a remarkable act of historical recovery, Blain expertly traces the vital role women played in shaping black nationalist politics between the 1920s and 1960s. . . . Essential reading to anyone wanting to better understand the history of race, empire, and imperialism in the twentieth century. Perhaps most important though, Blain provides us with a timely reminder of the militancy and tenacity of the women who were at the heart of black nationalist politics. . . . These women created the ideological and practical tools for future generations of activists to take up the global struggle against white supremacy."—H-Diplo

"Set the World on Fire is history at its very best. Keisha Blain has given us an unobstructed window into the minds of black nationalist women. Sharp voices and gripping stories reveal a philosophical flexibility paired with an inflexible challenge to global white supremacy."—Ibram X. Kendi, National Book Award-winning author of Stamped from the Beginning

"Set the World on Fire shows us what is hidden in plain sight. More importantly, she lays bare the foundational elements of black nationalist thought and practice. In short, women were not simply helpmates to men, but the creators and constructors of the intellectual, ideological, and organizational underpinnings of the black nationalist project in the 20th century."—Public Books

"Keisha Blain has dug deeply into twentieth-century history to reveal the personal and political lives of African diaspora women determined to Set the World on Fire as they walked a fine line between leading and adhering to the black nationalist dictate of masculine leadership. Drawing upon a range of materials, including FBI files, personal letters, newspapers, and federal census records, Blain details every step of these women's organizing efforts and their pan-African visions."—Ula Taylor, author of The Promise of Patriarchy: Women and the Nation of Islam

"Set the World on Fire illuminates a dark though important area of history. Deftly written, it is also a signal contribution to African American studies and women's studies. It shines brightening light on a previously-and scandalously-neglected topic."—Gerald Horne, author of Facing the Rising Sun: African Americans, Japan, and the Rise of Afro-Asian Solidarity