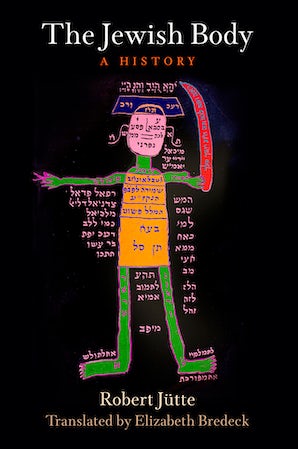 That the human body can be the object not only of biological study but also of historical consideration and cultural criticism is now widely accepted. But why, Robert Jütte asks, should a historian bother with the Jewish body in particular? And is the "Jewish body" as much a concept constructed over the course of centuries by Jews and non-Jews alike as it is a physical reality? To comprehend the notion and existence of a Jewish body, he contends, one needs to look both at the images and traits that have been ascribed to Jews by themselves and others, and to the specific bodily practices that have played an important role in creating the identity of a religious and cultural community.

Jütte has written an encyclopedic survey of the Jewish body as it has existed and as it has been imagined from biblical times to the present, often for anti-Jewish purposes. He examines the techniques for caring for the body that Jews acquire in childhood from parents and authority figures and how these have changed over the course of a more than 2000-year history, most of it spent in exile. From consideration of traditional body stereotypes, such as the so-called Jewish nose, to matters of gender and sexuality, sickness and health, and the inevitable end of the body in death, The Jewish Body explores the historical foundations of the human physis in all its aspects.

"it is impossible to describe or adequately praise the breadth and depth of Jutte’s scholarship and erudition. He has collected data and examples from the widest possible number of sources, with Hasidic legends and Yiddish proverbs nestling comfortably next to quotes from Josephus and advertisements from nineteenth-century German newspapers."—Journal of Medieval Religious Cultures

"The overriding impression left on the reader is wonder over the novel aspects of Judaism Jütte has managed to reveal, matched with astonishment at the breadth and depth of his scholarship and of the vast range of source material he has uncovered...The Jewish Body focuses on the most fundamental aspect of life on earth – the human body – in relation to the Jewish religion and practice, an angle of Judaism perhaps too little considered in the past. Jütte’s work is highly original in concept and encyclopedic in scope. It will instruct, amuse and entertain in equal measure."—The Jerusalem Post

"A work of exemplary scholarship over a number of languages and cultures, The Jewish Body is a summa summarum of the various debates on body history, race, gender, ethnicity, and nationalism."—Sander Gilman, Emory University

"This is a masterful study of all aspects of the notion of the ‘Jewish body’ across the millennia, from biblical to modern times…[T]his is a remarkable, comprehensive, and exceedingly learned work."—Choice