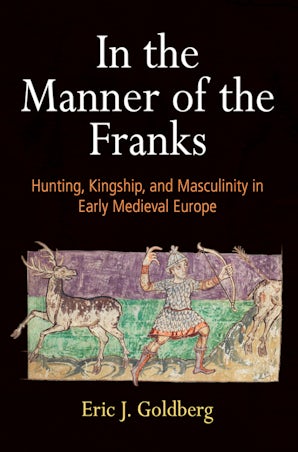 In the Manner of the Franks

Eric J. Goldberg traces the long history of early medieval hunting from the late Roman Empire to the death of the last Carolingian king, Louis V, in a hunting accident in 987. He focuses chiefly on elite men and the changing role that hunting played in articulating kingship, status, and manhood in the post-Roman world. While hunting was central to elite lifestyles throughout these centuries, the Carolingians significantly altered this aristocratic activity in the later eighth and ninth centuries by making it a key symbol of Frankish kingship and political identity. This new connection emerged under Charlemagne, reached its high point under his son and heir Louis the Pious, and continued under Louis's immediate successors. Indeed, the emphasis on hunting as a badge of royal power and Frankishness would prove to be among the Carolingians' most significant and lasting legacies.

Goldberg draws on written sources such as chronicles, law codes, charters, hagiography, and poetry as well as artistic and archaeological evidence to explore the changing nature of early medieval hunting and its connections to politics and society. Featuring more than sixty illustrations of hunting imagery found in mosaics, stone sculpture, metalwork, and illuminated manuscripts, In the Manner of the Franks portrays a vibrant and dynamic culture that encompassed red deer and wild boar hunting, falconry, ritualized behavior, female spectatorship, and complex forms of specialized knowledge that united kings and nobles in a shared political culture, thus locating the origins of courtly hunting in the early Middle Ages.

"In the Manner of the Franks is both a history of hunting in the early Middle Ages—who did it, how it was done, what was hunted—and an exploration of the cultural meanings given to hunting...There is a wealth of fascinating information in this book,which includes regular comparisons between the Franks and neighboring peoples and the broader contexts of human history. Throughout, Goldberg seeks to understand the fullest meaning of the expression Einhard used to describe Charlemagne’s hunting practices: more Francorum, 'in the manner of the Franks.'"—Speculum

"Eric Goldberg’s study offers a thoughtful and thorough argument that hunting mattered in the early Middle Ages, above all to male, lay aristocrats, as an integral component of their masculine identity and socio-political hegemony...In Goldberg’s discussions, hunting emerges as a dynamic, multivalent activity central to the performance of gender, political communication, and human interactions with the natural world. Goldberg has finally given early medieval hunting the hearing it deserves."—Early Medieval Europe

"[T]his monograph presents a convincing mosaic of the centrality of hunting in the social and cultural worlds of Carolingian elites...In the Manner of the Franks is without doubt the most sustained treatment in the English language of the intersection between political ideology and hunting practices in Carolingian Europe."—Mediaevistik

"In the Manner of the Franks is an excellent and insightful book that will serve as the standard reference work on the hunt for many years, not only for historians of late Antique and early medieval studies but also for anyone interested in the cultural history of hunting in the Christian West."—Helmut Reimitz, Princeton University

"This is a genuinely original contribution to the study of early medieval political culture in its broadest sense, grounded in a well-researched study of the practicalities of hunting methods and quarries."—Rachel Stone, King's College London