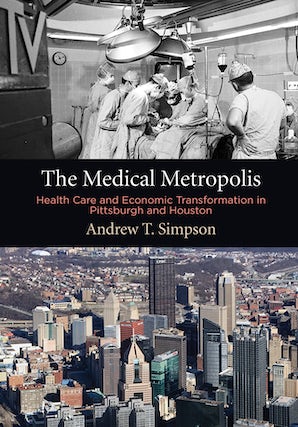 Health Care and Economic Transformation in Pittsburgh and Houston

In 2008, the University of Pittsburgh Medical Centers (UPMC) hoisted its logo atop the U.S. Steel Building in downtown Pittsburgh, symbolically declaring that the era of big steel had been replaced by the era of big medicine for this once industrial city. More than 1,200 miles to the south, a similar sense of optimism pervaded the public discourse around the relationship between health care and the future of Houston's economy. While traditional Texas industries like oil and natural gas still played a critical role, the presence of the massive Texas Medical Center, billed as "the largest medical complex in the world," had helped to rebrand the city as a site for biomedical innovation and ensured its stability during the financial crisis of the mid-2000s.

Taking Pittsburgh and Houston as case studies, The Medical Metropolis offers the first comparative, historical account of how big medicine transformed American cities in the postindustrial era. Andrew T. Simpson explores how the hospital-civic relationship, in which medical centers embraced a business-oriented model, remade the deindustrialized city into the "medical metropolis." From the 1940s to the present, the changing business of American health care reshaped American cities into sites for cutting-edge biomedical and clinical research, medical education, and innovative health business practices. This transformation relied on local policy and economic decisions as well as broad and homogenizing national forces, including HMOs, biotechnology programs, and hospital privatization. Today, the medical metropolis is considered by some as a triumph of innovation and revitalization and by others as a symbol of the excesses of capitalism and the inequality still pervading American society.

Introduction. Making the Medical Metropolis
Chapter 1. Building Cities of Health: Medical Centers in Pittsburgh and Houston Before 1965
Chapter 2. The Hospital-Civic Relationship in the Shadow of the Great Society
Chapter 3. City of Hearts, City of Livers: Specialty Medicine and the Creation of New Civic Identities
Chapter 4. "When the Fire Dies": Biotechnology and the Quest for a New Economy
Chapter 5. The Coming of the System: Changing Health Care Delivery in the Medical Metropolis
Chapter 6. A Charitable Mission or a Profitable Charity? Redefining the Hospital-Civic Relationship
Epilogue. The Future of the Medical Metropolis

"Simpson demonstrates the impressive depth and breadth of his research. He not only chronicles the major developments in the health care industry in each city, he also peels back the curtain on the internal deliberations of the major players as they made strategic decisions. These details provide useful insights for those interested in nonprofit governance and public-private partnerships, particularly in the context of urban economic development. Likewise, these case studies chronicle how national trends in American health care throughout the 20th century affected local health care industries."—Journal of Urban Affairs

"Access to health care remains near the center of American political discourse. Based on two local studies, Andrew T. Simpson deftly explains the economic imperatives of postwar urban sprawl in molding the shifting relationship between medical centers and the communities they serve."—Guenter B. Risse, author of Mending Bodies, Saving Souls: A History of Hospitals

"Well framed and full of insights for audiences in urban history, business history, health policy, and the history of medicine, this book interleaves the soaring visions and sobering realities of two American cities that sought to promote hopeful social and economic futures by investing in not-for profit health institutions. By situating the uncontrolled growth of U.S. healthcare expenditures alongside deliberate local and regional plans to realize civic improvement through healthcare revenues, Andrew T. Simpson firmly establishes the role of place, contingency, and governance in shaping the seemingly ungovernable system that threatens to bankrupt municipal economies at the same time that it promises to save them."—Jeremy Greene, author of Generic: The Unbranding of Modern Medicine