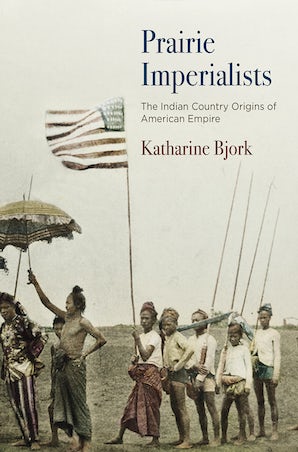 The Spanish-American War marked the emergence of the United States as an imperial power. It was when the United States first landed troops overseas and established governments of occupation in the Philippines, Cuba, and other formerly Spanish colonies. But such actions to extend U.S. sovereignty abroad, argues Katharine Bjork, had a precedent in earlier relations with Native nations at home. In Prairie Imperialists, Bjork traces the arc of American expansion by showing how the Army's conquests of what its soldiers called "Indian Country" generated a repertoire of actions and understandings that structured encounters with the racial others of America's new island territories following the War of 1898.

Prairie Imperialists follows the colonial careers of three Army officers from the domestic frontier to overseas posts in Cuba and the Philippines. The men profiled—Hugh Lenox Scott, Robert Lee Bullard, and John J. Pershing—internalized ways of behaving in Indian Country that shaped their approach to later colonial appointments abroad. Scott's ethnographic knowledge and experience with Native Americans were valorized as an asset for colonial service; Bullard and Pershing, who had commanded African American troops, were regarded as particularly suited for roles in the pacification and administration of colonial peoples overseas. After returning to the mainland, these three men played prominent roles in the "Punitive Expedition" President Woodrow Wilson sent across the southern border in 1916, during which Mexico figured as the next iteration of "Indian Country."

With rich biographical detail and ambitious historical scope, Prairie Imperialists makes fundamental connections between American colonialism and the racial dimensions of domestic political and social life—during peacetime and while at war. Ultimately, Bjork contends, the concept of "Indian Country" has served as the guiding force of American imperial expansion and nation building for the past two and a half centuries and endures to this day.

"In Prairie Imperialists, Katherine Bjork examines how military service on the Western frontier shaped the worldviews, repertoires, and practices of three U.S. army officers between the 1870s and World War I. In this deeply researched analysis of the careers of Hugh Lenox Scott, Robert Lee Bullard, and John J. Pershing, Bjork convincingly connects continental and overseas imperial thrusts through networked biographies in support of her thesis that 'Indian Country-doctrinal and discursive-has been at the center of American imperial expansion and nation building for two and a half centuries' . . . [An] in-depth exploration of intra-imperial careers [that] constitutes an impressive research accomplishment few historians have so far provided."—The Journal of the Gilded Age and Progressive Era

"The argument of Prairie Imperialists is a valuable one because it links cultural and military history in a way often neglected. Military history has frequently been told without a deeper sense of the cultures from which the militaries came and that shaped how they fought wars. Cultural history has often practiced the same aversion from the other side. Prairie Imperialists, by connecting American culture and American wars, ends up deepening our understanding of both . . . [W]ell worth the read, for its thoughtful and nuanced understanding and exploration of not only how the United States went out to the world and engaged with it militarily, but how America understood the world it was going out to engage."—American Historical Review

"Katharine Bjork's astutely researched new book casts turn-of-the-twentieth century 'Indian Country' as a contested space, both geographic and cultural, as U.S. imperialists forcefully occupied the American West and Spanish-American War territories. Intricately weaving together the stories of three junior army officers-Hugh Lenox Scott, Robert Lee Bullard, and John J. Pershing-Bjork illustrates how they, and the U.S. military and empire at large, developed rationales and strategies for pacifying peoples resistant to claims of American authority . . . Bjork deepens the scholarship that emphasizes patterns of continuity in U.S. imperialism and points to the period's dominant racial hierarchies that fueled and rationalized American intervention into the West and beyond . . . Bjork's scholarly intervention and rich research advances understanding of American empire in an accessible and provocative way."—Pacific Historical Review

"In tracking the careers of army officers from the West to the world, Katharine Bjork shows how ruling strategies and rationalizations for American empire began in the lessons learned and, ominously, unlearned in Indian Country. An essential book for all who would know the roots of America's imperial entanglements, from Cuba and the Philippines to Iraq and Afghanistan."—Louis S. Warren, author of God's Red Son: The Ghost Dance Religion and the Making of Modern America

"[A]n ambitious book plotting the ‘Indian Country’ origins of the new U.S. empire. Persuasively, [Bjork] shows that U.S. Army officers’ attempts to fight, rule, and know Native Americans between the 1870s and 1890s endured in their warfare, civil administration, and cultural knowledge in Cuba, the Philippines, and northern Mexico before World War I…Bjork capably excavat[es] the foundations of America’s early-twentieth-century empire from the ruins of a once-independent Indian Country."—Journal of Arizona History

"By skillfully tracing the elusive biographical threads of key U.S. Army officers as they shifted seamlessly from fighting 'Indian wars' in the American West to pacifying a Philippine Republic, Katharine Bjork reveals the surprising continuities that shaped the character of U.S. global power."—Alfred McCoy, University of Wisconsin-Madison

"In Prairie Imperialists, Katharine Bjork delivers a necessary and overdue analysis of a pivotal period in U.S. history: she traces the transfer of institutions, the overlap of personnel, and the persistence of mindsets between America's 'Indian Wars' of the late nineteenth century and its post-1898 insular empire. This is the book we have been waiting for."—Christopher Capozzola, Massachusetts Institute of Technology