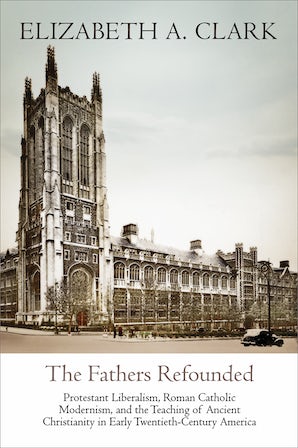 by Elizabeth A. Clark

In the early twentieth century, a new generation of liberal professors sought to prove Christianity's compatibility with contemporary currents in the study of philosophy, science, history, and democracy. These modernizing professors—Arthur Cushman McGiffert at Union Theological Seminary, George LaPiana at Harvard Divinity School, and Shirley Jackson Case at the University of Chicago Divinity School—hoped to equip their students with a revisionary version of early Christianity that was embedded in its social, historical, and intellectual settings. In The Fathers Refounded, Elizabeth A. Clark provides the first critical analysis of these figures' lives, scholarship, and lasting contributions to the study of Christianity.

The Fathers Refounded continues the exploration of Christian intellectual revision begun by Clark in Founding the Fathers: Early Church History and Protestant Professors in Nineteenth-Century America. Drawing on rigorous archival research, Clark takes the reader through the professors' published writings, their institutions, and even their classrooms—where McGiffert tailored nineteenth-century German Protestant theology to his modernist philosophies; where LaPiana, the first Catholic professor at Harvard Divinity School, devised his modernism against the tight constraints of contemporary Catholic theology; and where Case promoted reading Christianity through social-scientific aims and methods. Each, in his own way, extricated his subfield from denominationally and theologically oriented approaches and aligned it with secular historical methodologies. In so doing, this generation of scholars fundamentally altered the directions of Catholic Modernism and Protestant Liberalism and offered the promise of reconciling Christianity and modern intellectual and social culture.

"The Fathers Refounded is a truly brilliant book, massively researched, beautifully written, often witty, and rich with insight."—Grant Wacker, author of America's Pastor: Billy Graham and the Shaping of America

"Focusing on Protestant and Catholic thinkers who developed fresh interpretations of Christianity during a transformational era in U.S. intellectual and religious life, Elizabeth A. Clark constructs an illuminating narrative about the complex relationship between Christian faith and modern experience. Her transdenominational work is a model for future scholarship in U.S. religious history."—James P. McCartin, Fordham University