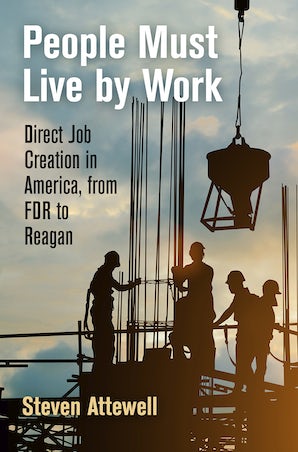 People Must Live by Work

Direct Job Creation in America, from FDR to Reagan

In People Must Live by Work, Steven Attewell presents the history of an idea—direct job creation—that transformed the role of government in ameliorating unemployment by hiring the unemployed en masse to prevent widespread destitution in economic crises. For ten years, between 1933 and 1943, direct job creation was put into practice, employing more than eight million Americans and making the federal government the largest single employer in the country. Yet in 2008, when the most dramatic economic crisis since the Depression occurred, the idea of direct job creation was nowhere to be found on the list of policies deemed feasible or advisable for government at any level.

People Must Live by Work traces the rise and fall of direct job creation policy—how it was put into practice, how it came within a hairbreadth of becoming a permanent feature of American economic and social administration, and why it has been largely forgotten or discounted today. Contrary to more conventional arguments, Attewell reveals that the New Deal ended the Great Depression before the United States entered World War II and its jobs programs continued to influence policy debates over the Employment Act of 1946. He examines the deliberations surrounding the Humphrey-Hawkins Full Employment Act that was signed into law in 1978 and demonstrates the ways in which direct job creation played a significant and polarizing role in dividing the economic establishment and the Democratic party in the 1970s. People Must Live by Work not only chronicles the ambition, constraints, and achievements of direct job creation policy in the past but also proposes a framework for understanding its enduring significance and promise for today.

"People Must Live to Work is worth recommending. The book’s six chapters are packed with useful details and incisive historical and historiographical analysis. Even when discussing topics that have received much scholarly attention, this book offers the reader plenty of original insights and information."—Journal of Contemporary History

"Steven Attewell does the important work of recapturing the history of direct job creation in the United States. Based on impressive archival research, deep knowledge of policy debates, and a willingness to engage and challenge conventional wisdom from the perspective of history, People Must Live by Work illustrates how forgotten or abandoned policy strategies can expand our political imagination as we consider the social and economic challenges of the twenty-first century."—Guian McKee, University of Virginia