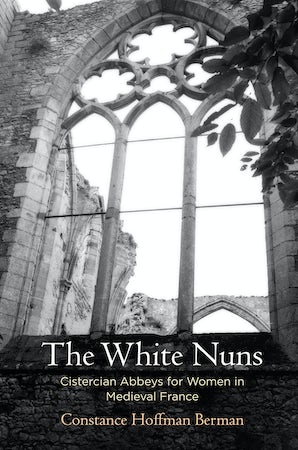 Modern studies of the religious reform movement of the central Middle Ages have often relied on contemporary accounts penned by Cistercian monks, who routinely exaggerated the importance of their own institutions while paying scant attention to the remarkable expansion of abbeys of Cistercian women. Yet by the end of the thirteenth century, Constance Hoffman Berman contends, there were more houses of Cistercian nuns across Europe than of monks. In The White Nuns, she charts the stages in the nuns' gradual acceptance by the abbots of the Cistercian Order's General Chapter and describes the expansion of the nuns' communities and their adaptation to a variety of economic circumstances in France and throughout Europe. While some sought contemplative lives of prayer, the ambition of many of these religious women was to serve the poor, the sick, and the elderly.

Focusing in particular on Cistercian nuns' abbeys founded between 1190 and 1250 in the northern French archdiocese of Sens, Berman reveals the frequency with which communities of Cistercian nuns were founded by rich and powerful women, including Queen Blanche of Castile, heiresses Countess Matilda of Courtenay and Countess Isabelle of Chartres, and esteemed ladies such as Agnes of Cressonessart. She shows how these founders and early patrons assisted early abbesses, nuns, and lay sisters by using written documents to secure rights and create endowments, and it is on the records of their considerable economic achievements that she centers her analysis.

The White Nuns considers Cistercian women and the women who were their patrons in a clear-eyed reading of narrative texts in their contexts. It challenges conventional scholarship that accepts the words of medieval monastic writers as literal truth, as if they were written without rhetorical skill, bias, or self-interest. In its identification of long-accepted misogynies, its search for their origins, and its struggle to reject such misreadings, The White Nuns provides a robust model for historians writing against received traditions.

PART I. WERE THERE CISTERCIAN NUNS IN MEDIEVAL EUROPE?
Chapter 1. Reform Monasticism and Cistercian Nuns in Western Europe
Chapter 2. Visitation of Nuns and Their Regularization
Chapter 3. Cistercian Nuns and the Order's Economic Practices

"With her excellent The White Nuns, Constance Hoffman Berman completes a trilogy of revisionist books on medieval Cistercians… Berman notes that all too often, modern historians have taken at face value frequently misogynist medieval accounts of nuns, Cistercian and otherwise. That points to the immense value of this study: it examines thousands of records that show what these women actually did, as opposed to what men said they did (or didn’t do). If you are interested in medieval monasticism, the Cistercian Order, or medieval women in general, please read The White Nuns. This long-awaited book does not disappoint."—Catholic Historical Review

"The White Nuns, . . . represents the culmination of over thirty years of painstaking archival and literary research during which Berman has challenged and turned upside down received scholarship on many aspects of the Cistercian Order, not least its attitude towards, and treatment of, Cistercian nuns."—French History

"The White Nuns provides a treasure trove of highly significant research within the fields of medieval religious and economic history. Constance Hoffman Berman presents a detailed, thoughtful, and stimulating discussion of reformed Cistercian nuns across a significant timescale."—Brenda Bolton, University of London