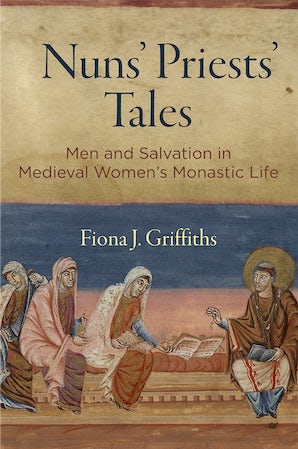 During the Middle Ages, female monasteries relied on priests to provide for their spiritual care, chiefly to celebrate Mass in their chapels but also to hear the confessions of their nuns and give last rites to their sick and dying. These men were essential to the flourishing of female monasticism during the eleventh and twelfth centuries, yet they rarely appear in scholarly accounts of the period. Medieval sources are hardly more forthcoming. Although medieval churchmen consistently acknowledged the necessity of male spiritual supervision in female monasteries, they also warned against the dangers to men of association with women. Nuns' Priests' Tales investigates gendered spiritual hierarchies from the perspective of nuns' priests—ordained men (often local monks) who served the spiritual needs of monastic women.

Celibacy, misogyny, and the presumption of men's withdrawal from women within the religious life have often been seen as markers of male spirituality during the period of church reform. Yet, as Fiona J. Griffiths illustrates, men's support and care for religious women could be central to male spirituality and pious practice. Nuns' priests frequently turned to women for prayer and intercession, viewing women's prayers as superior to their own, since they were the prayers of Christ's "brides." Casting nuns as the brides of Christ and adopting for themselves the role of paranymphus (bridesman, or friend of the bridegroom), these men constructed a triangular spiritual relationship in which service to nuns was part of their dedication to Christ. Focusing on men's spiritual ideas about women and their spiritual service to them, Nuns' Priests' Tales reveals a clerical counter-discourse in which spiritual care for women was depicted as a holy service and an act of devotion and obedience to Christ.

Prologue
Chapter 1. The Puzzle of the Nuns' Priest
Chapter 2. Biblical Models: Women and Men in the Apostolic Life
Chapter 3. Jerome and the Noble Women of Rome
Chapter 4. Brothers, Sons, and Uncles: Nuns' Priests and Family Ties
Chapter 5. Speaking to the Bridegroom: Women and the Power of Prayer
Conclusion

"[An] erudite volume . . . Griffiths contributes importantly to a more inclusive depiction of female monastic life and male spirituality (a story of greater mutuality) and to a better-nuanced understanding of relations between men and women in medieval society."—Speculum

"The reform era was obsessed with clerical celibacy, yet it also witnessed a great expansion of women's religious life-and all those newly founded nunneries required priests to provide pastoral care. In an age known for its shrill misogyny, how did such priests justify their service to women, and what positive roles did nuns play in male spirituality? In her urgently needed book, Nuns' Priests' Tales, Fiona Griffiths teases out some fascinating answers."—Barbara Newman, Northwestern University

"This delightful and learned book examines the ways in which the ordained men who provided sacramental services and spiritual counsel for nuns understood their relationships with women. The setting is primarily the eleventh and twelfth centuries-a period when close bonds between priests and any female were viewed with deepening suspicion. Fiona J. Griffiths, however, explores the positive models that monks and priests evoked at that time to justify and even celebrate their charitable bonds with the nuns they served."—Megan McLaughlin, author of Sex, Gender, and Episcopal Authority in an Age of Reform, 1000-1122