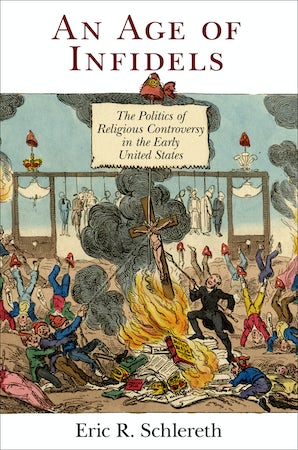 An Age of Infidels

The Politics of Religious Controversy in the Early United States

Historian Eric R. Schlereth places religious conflict at the center of early American political culture. He shows ordinary Americans—both faithful believers and Christianity's staunchest critics—struggling with questions about the meaning of tolerance and the limits of religious freedom. In doing so, he casts new light on the ways Americans reconciled their varied religious beliefs with political change at a formative moment in the nation's cultural life.

After the American Revolution, citizens of the new nation felt no guarantee that they would avoid the mire of religious and political conflict that had gripped much of Europe for three centuries. Debates thus erupted in the new United States about how or even if long-standing religious beliefs, institutions, and traditions could be accommodated within a new republican political order that encouraged suspicion of inherited traditions. Public life in the period included contentious arguments over the best way to ensure a compatible relationship between diverse religious beliefs and the nation's recent political developments.

In the process, religion and politics in the early United States were remade to fit each other. From the 1770s onward, Americans created a political rather than legal boundary between acceptable and unacceptable religious expression, one defined in reference to infidelity. Conflicts occurred most commonly between deists and their opponents who perceived deists' anti-Christian opinions as increasingly influential in American culture and politics. Exploring these controversies, Schlereth explains how Americans navigated questions of religious truth and difference in an age of emerging religious liberty.

"[An Age of Infidels] offers anyone curious about the vexed relationship between American religion and politics a compelling explanation of how that relationship became established."—Journal of the Early Republic

"[Schlereth] has lucidly described the strategies and practices through which early Americans sought to bring religious convictions, Christians and deist, to bear on politics and culture."—American Historical Review

"Fresh and insightful. . . . [An Age of Infidels] should remain required reading on church-state relations, and religion in the early republic, for quite some time."—Journal of Church and State

"In this important study of deism and free enquiry in the early United States, Eric Schlereth shows how religious "infidelity," whose specter had once terrified Americans, became a living, breathing-and not altogether terrifying-reality. Both broad in conception and judicious in its use of evidence, Schlereth's rigorous account of infidelity and religious controversy offers an exciting and original interpretation of early American cultural politics."—Chris Beneke, Bentley University