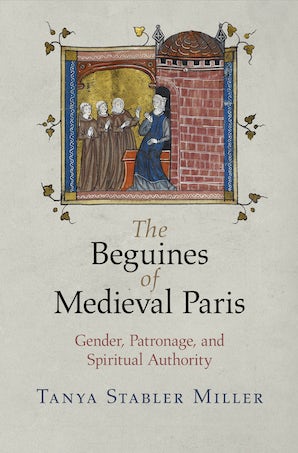 The Beguines of Medieval Paris

In the thirteenth century, Paris was the largest city in Western Europe, the royal capital of France, and the seat of one of Europe's most important universities. In this vibrant and cosmopolitan city, the beguines, women who wished to devote their lives to Christian ideals without taking formal vows, enjoyed a level of patronage and esteem that was uncommon among like communities elsewhere. Some Parisian beguines owned shops and played a vital role in the city's textile industry and economy. French royals and nobles financially supported the beguinages, and university clerics looked to the beguines for inspiration in their pedagogical endeavors. The Beguines of Medieval Paris examines these religious communities and their direct participation in the city's commercial, intellectual, and religious life.

Drawing on an array of sources, including sermons, religious literature, tax rolls, and royal account books, Tanya Stabler Miller contextualizes the history of Parisian beguines within a spectrum of lay religious activity and theological controversy. She examines the impact of women on the construction of medieval clerical identity, the valuation of women's voices and activities, and the surprising ways in which local networks and legal structures permitted women to continue to identify as beguines long after a church council prohibited the beguine status. Based on intensive archival research, The Beguines of Medieval Paris makes an original contribution to the history of female religiosity and labor, university politics and intellectual debates, royal piety, and the central place of Paris in the commerce and culture of medieval Europe.

Appendix. Beguines Whose Occupations Are Known

"An impressive demonstration of how far a scholar can go with painstaking investigation and interpretation of scattered and limited evidence. . . . There is a great deal to admire and ponder [in this book]."—The Medieval Review

"The Beguines of Medieval Paris is an informative and lively book that will make readers see these women not as the hypocritical figures of the satirical tradition nor as the targets of hostile papal pronouncements but as active and charitable women who carved out an important place for themselves in a city replete with religious orders and institutions."—Catholic Historical Review

"This lovely book engages with the histories of work, women, and spirituality, as well as with urban and intellectual history. . . . Excellent."—Journal of Interdisciplinary History

"This is a wonderful new study of the beguines who lived in Paris and enjoyed considerable public respect, especially by King Louis IX. . . . Tanya Stabler Miller provides a detailed discussion of the available sources and illustrates through a variety of approaches how and why the beguines could establish themselves so well against all protests and condemnations by the theologians and clerics."—Mediaevistik

"Tanya Stabler Miller writes with intelligence and clarity. The contributions she makes to our understanding of how female spirituality was connected to female labor are revelatory."—William Chester Jordan, Princeton University

"An important and rich case study. In telling detail, The Beguines of Medieval Paris sheds light on the broader contours of this religious movement."—Walter Simons, Dartmouth College