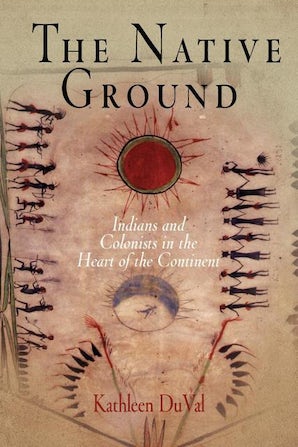 Indians and Colonists in the Heart of the Continent

In The Native Ground, Kathleen DuVal argues that it was Indians rather than European would-be colonizers who were more often able to determine the form and content of the relations between the two groups. Along the banks of the Arkansas and Mississippi rivers, far from Paris, Madrid, and London, European colonialism met neither accommodation nor resistance but incorporation. Rather than being colonized, Indians drew European empires into local patterns of land and resource allocation, sustenance, goods exchange, gender relations, diplomacy, and warfare. Placing Indians at the center of the story, DuVal shows both their diversity and our contemporary tendency to exaggerate the influence of Europeans in places far from their centers of power. Europeans were often more dependent on Indians than Indians were on them.

Now the states of Arkansas, Oklahoma, Kansas, and Colorado, this native ground was originally populated by indigenous peoples, became part of the French and Spanish empires, and in 1803 was bought by the United States in the Louisiana Purchase. Drawing on archaeology and oral history, as well as documents in English, French, and Spanish, DuVal chronicles the successive migrations of Indians and Europeans to the area from precolonial times through the 1820s. These myriad native groups—Mississippians, Quapaws, Osages, Chickasaws, Caddos, and Cherokees—and the waves of Europeans all competed with one another for control of the region.

Only in the nineteenth century did outsiders initiate a future in which one people would claim exclusive ownership of the mid-continent. After the War of 1812, these settlers came in numbers large enough to overwhelm the region's inhabitants and reject the early patterns of cross-cultural interdependence. As citizens of the United States, they persuaded the federal government to muster its resources on behalf of their dreams of landholding and citizenship.

With keen insight and broad vision, Kathleen DuVal retells the story of Indian and European contact in a more complex and, ultimately, more satisfactory way.

1. A Bordered Land
2. Hosting Strangers
3. Negotiators of a New Land
4. An Empire in the West
5. New Alliances
6. Better at Making Peace Than War
7. A New Order
8. The End of the Native Ground?

"Learned, engaging, and often provocative. . . . Informed by the most current work on Native American history, DuVal's work joins the best of it as a piece of prose, as an informative new history, as an excursion into historical method, and as an example of a historian's commitment to recover 'the Native Ground.'"—William and Mary Quarterly

"Whether scholars are interested in the Arkansas Valley or not, all specialists in early American and Native American history should read this book because of what it has to say about the 'Native Ground' in general."—American Historical Review

"Groundbreaking. . . . A work of immense significance."—Journal of the Early Republic

"Kathleen DuVal's The Native Ground shows how powerfully a change in perspective can alter our perception of history. Her focus on the shifting human relationships in the Arkansas River Valley will require readers to shift their geographic outlook from European outposts on North America's coasts to 'the heart of the continent.'"—Common-Place

"Moving beyond an 'Indians and Europeans' story, Kathleen DuVal looks instead at competing and overlapping stories involving multiple Native groups (Quapaws, Osages, and eventually Cherokees) who operate from different positions with different strategies and experiences, and incorporate an array of outsiders (Spanish, French, British, and eventually Americans). This is the kind of study we need more of."—Colin G. Calloway, Dartmouth College

"With keen insight and broad vision, Kathleen DuVal has produced an ambitious study of a neglected region in early American history, but the significance of her analysis transcends the Arkansas Valley and will influence scholars working in other areas of American Indian and colonial American history. She traces all of the connections with other regions and draws comparisons where appropriate, from the Northeast to Mexico, and makes Indian-to-Indian relations central to the story."—Daniel Usner, Vanderbilt University