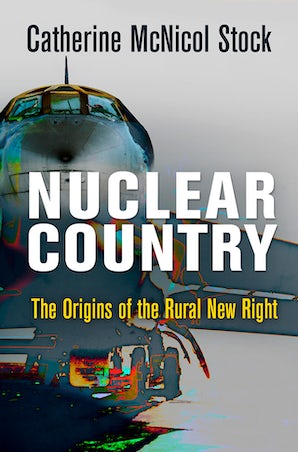 The Origins of the Rural New Right

Militarization and nuclearization were the historical developments most essential to the creation of the rural New Right.

Both North Dakota and South Dakota have long been among the most reliably Republican states in the nation: in the past century, voters have only chosen two Democrats, Franklin Roosevelt and Lyndon B. Johnson, and in 2016 both states preferred Donald Trump by over thirty points. Yet in the decades before World War II, the people of the Northern Plains were not universally politically conservative. Instead, many Dakotans, including Republicans, supported experiments in agrarian democracy that incorporated ideas from populism and progressivism to socialism and communism and fought against "bigness" in all its forms, including "bonanza" farms, out-of-state railroads, corporations, banks, corrupt political parties, and distant federal bureaucracies—but also, surprisingly, the culture of militarism and the expansion of American military power abroad.

In Nuclear Country, Catherine McNicol Stock explores the question of why, between 1968 and 1992, most voters in the Dakotas abandoned their distinctive ideological heritage and came to embrace the conservatism of the New Right. Stock focuses on how this transformation coincided with the coming of the military and national security states to the countryside via the placement of military bases and nuclear missile silos on the Northern Plains. This militarization influenced regional political culture by reinforcing or re-contextualizing long-standing local ideas and practices, particularly when the people of the plains found that they shared culturally conservative values with the military. After adopting the first two planks of the New Right—national defense and conservative social ideas—Dakotans endorsed the third plank of New Right ideology, fiscal conservativism. Ultimately, Stock contends that militarization and nuclearization were the historical developments most essential to the creation of the rural New Right throughout the United States, and that their impact can best be seen in this often-overlooked region's history.

"Stock deftly blurs the traditional parameters of political, social, and cultural history, explains the racial and gendered implications of militarization in view of ‘southern diaspora’ (as she and others have called it), and stretches the already vast historiography on modern American conservatism in several challenging and helpful ways. Nuclear Country also reconsiders the catalysts of modern conservatism, its geographic and temporal loci, and, quite frankly, explains more efficiently and compellingly than most how Cold War–era militarization—specifically the rapid expansion of American military bases— spurred a brand of patriotic, anticommunist conservatism that eventually made its way into the mainstream…[A] strikingly insightful and unapologetically forceful study. Engaging and accessible, the book is, in short, a triumph."—Journal of American History

"Catherine McNicol Stock's compelling new book Nuclear Country extends the history of the right back in time, opening in the late 1800s, to ask how a region that had once embraced radicalism gradually moved to the right. Nuclear Country will not only speak to scholars but also appeal to readers deeply engaged with our current political moment."—Kevin Boyle, author of Arc of Justice: A Saga of Race, Civil Rights, and Murder in the Jazz Age

"In her excellent book Nuclear Country, Catherine McNicol Stock expertly reveals the political impact of the arrival of Air Force bases and nuclear bombs during the Cold War period on places in the Great Plains. Stock's knowledge of the history of the Dakotas is both broad and intimate, and she writes lively, accessible prose that makes her story come alive for readers who know nothing about the region."—Michael Kazin, author of War Against War: The American Fight for Peace, 1914-1918