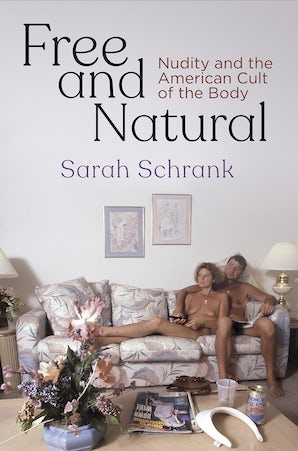 Nudity and the American Cult of the Body

From Naked Juice® to nude yoga, contemporary society is steeped in language that draws a connection from nudity to nature, wellness, and liberation. This branding promotes a "free and natural" lifestyle to mostly white and middle-class Americans intent on protecting their own bodies—and those of society at large—from overwork, environmental toxins, illness, conformity to body standards, and the hyper-sexualization of the consumer economy. How did the naked body come to be associated with "naturalness," and how has this notion influenced American culture?

Free and Natural explores the cultural history of nudity and its impact on ideas about the body and the environment from the early twentieth century to the present. Sarah Schrank traces the history of nudity, especially public nudity, across the unusual eras and locations where it thrived—including the California desert, Depression-era collectives, and 1950s suburban nudist communities—as well as the more predictable beaches and resorts. She also highlights the many tensions it produced. For example, the blurry line between wholesome nudity and sexuality became impossible to sustain when confronted by the cultural challenges of the sexual revolution. Many longtime free and natural lifestyle enthusiasts, fatigued by decades of legal battles, retreated to private homes and resorts while the politics of gay rights, sexual liberation, environmentalism, and racial equality of the 1970s inspired a new generation of radical advocates of public nudity.

By the dawn of the twenty-first century, Schrank demonstrates, a free and natural lifestyle that started with antimaterialist, back-to-the-land rural retreats had evolved into a billion-dollar wellness marketplace where "Naked™" sells endless products promising natural health, sexual fulfilment, organic food, and hip authenticity. Free and Natural provides an in-depth account of how our bodies have become tethered so closely to modern ideas about nature and identity and yet have been consistently subjected to the excesses of capitalism.

"This excellent book examines nudity and changing American notions of the body from the early twentieth century to the present . . . Well-researched, well-written, accessible, and fascinating, Free and Natural deserves a wide scholarly and popular readership."—Southern California Quarterly

"Sarah Schrank's excellent new book Free and Natural charts the evolution of nudism in the United States . . . American history, Schrank teaches us, can be chronicled on our attitudes toward naked bodies, which reflect the forward march of capitalism more than any sort of radicalism."—Pacific Historical Review

"Uncovering truths about the meaning of the body that are not as self-evident as its unadorned form would claim, Sarah Schrank's Free and Natural is a lively, enlightening book authored by an accomplished historian at the height of her powers."—Whitney Strub, Rutgers University-Newark

"A rich narrative and rewarding read, Free and Natural reveals the long backstories behind contemporary debates about our bodily selves and provocatively reframes the study of 'the body' as deeply enmeshed in multiple strands of modern cultural history-notably, the shifting beliefs about nature and environment as well as public and private space."—Phoebe S. K. Young, University of Colorado Boulder