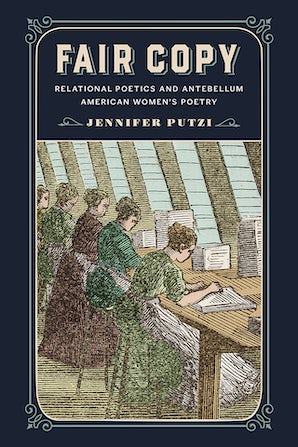 In Fair Copy Jennifer Putzi studies the composition, publication, and circulation of American women's poetry in the antebellum United States. In opposition to a traditional scholarly emphasis on originality and individuality, or a recovery method centered on author-based interventions, Putzi proposes a theory and methodology of relational poetics: focusing on poetry written by working-class and African American women poets, she demonstrates how an emphasis on relationships between and among people and texts shaped the poems that women wrote, the avenues they took to gain access to print, and the way their poems functioned within a variety of print cultures. Yet it is their very relationality which has led to these poems and the poets who published them being written out of literary history. Fair Copy models a radical reading and recovery of this work in a way that will redirect the study of nineteenth-century American women's poetry.

Beginning with Lydia Huntley Sigourney and ending with Elizabeth Akers Allen and Frances Ellen Watkins Harper, Putzi argues that relational practices like imitation, community, and collaboration distinguished the poetry of antebellum American women, especially those whose access to print was mediated by class or race. To demonstrate this point, she recovers poetry by the "factory girls" of the Lowell Offering, African American poet Sarah Forten, and domestic servant Maria James, whose volume Wales, and Other Poems was published in 1839. Putzi's work reveals a careful navigation of the path to print for each of these writers, as well as a fierce claim to poetry and all that it represented in the antebellum United States.

Acknowledgments
Introduction
Chapter 1. The American Hemans: Lydia Sigourney's Relational Poetics
Chapter 2. "The Songs Which All Can Sing": Imitation and Working Women's Poetry in the Lowell Offering
Chapter 3. "My Country": Communal Authorship and Citizenship in Sarah Louisa Forten's Liberator Poems
Chapter 4. "What Is Poetry?": Class, Collaboration, and the Making of Wales, and Other Poems
Chapter 5. "Some Queer Freak of Taste": Relational Poetics and Literary Proprietorship in the "Rock Me to Sleep" Controversy
Conclusion. Recovering the Unremarkable
Notes
Bibliography
Index

"Jennifer Putzi offers five case studies of women poets' 'relational poetics' under conditions of authorship that depend on intersecting categories of race, class, and gender. She maps the significance of unremarkable or indistinguishable practices by unknown and in some way irrecoverable women poets in order to show that the very lack of distinction or originality, the impossibility of identifying a signature style, marks the poems as accomplishments that depend on the contexts of production, circulation, and reception."—Eliza Richards, The University of North Carolina at Chapel Hill