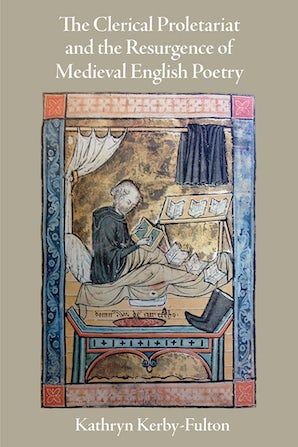 The Clerical Proletariat and the Resurgence of Medieval English Poetry

Despite the great literary achievements of Chaucer, Langland, and the Pearl Poet, Ricardian English books were still a niche market in 1400. As Kathryn Kerby-Fulton shows, however, their generation was transformational in nurturing the resurgence of English writing, in part as a result of the mass underemployment of clerks originally trained for the church but unable to find steady positions in it. Surviving instead as ecclesiastical or choral "piece workers," or in secular jobs in government or private households, this "clerical proletariat" lived and worked in liminal spaces between the ecclesiastical and lay world. And there the most enterprising found new material—and new audiences—for poetry in English.

Since English book production in London prior to 1380 was rare, Kerby-Fulton's study begins in the prior century with great regional poets, revealing their early experimentation with a new poetics of vocational crisis. Preoccupied with underemployment, patronage, careerist ambition, alienation, and changing literary fashion, these thirteenth-century writers were choosing the more avant garde option of writing in English while feeling backwards to earlier tradition in works such as Laȝamon's Brut and The Owl and the Nightingale. These early experimenters invoked semi-remembered literary forms in a still evolving written vernacular, breaking ground for Ricardian writers, who turned to these conventions during the massive clerical unemployment of the Great Schism era. Kerby-Fulton's is the first study of Langland's legacy of articulating an authorial employment crisis, and its echoes in Hoccleve and Audelay. It also uses new tools for uncovering proletarian writers in unattributed Middle English works, including the famous Harley 2253 lyrics, the "York Realist's" Second Trial from the York Cycle, St. Erkenwald, and Wynnere and Wastour. Taking in proletarian themes, including class, meritocracy, the abuse of children ("Choristers' Lament"), the gig economy, precarity, and the breaking of intellectual elites (Book of Margery Kempe), The Clerical Proletariat and the Resurgence of Medieval English Poetry speaks to both past and present employment urgencies.

Preface. "Decidedly not the national language"
Introduction. The Clericus Class, Underemployment, and the Golden Age of Middle English Poetry

Conclusion. The Poet as Public Intellectual: Achievements and Characteristics of Proletarian Writers

"What a pleasure to pick up a book so attentive to issues of unemployment and precarity—realities that seem to never go away for working people. Kerby-Fulton does this by exploring a subsection of medieval workers—variously understudied, invisible, neglected, or never properly contextualized—for their importance in literary history…The book really makes us think about merit, exclusion, education, ambition, vocation, resiliency, spirituality, inspiration, satire, critique, imagination, independence, hegemony, and how we personally, artistically, and professionally react to it all. Kerby-Fulton humbly makes clear that there is more work to be done."—Modern Philology

"Kathryn Kerby-Fulton’s most recent monograph advances an argument of such elegant explanatory power that it seems almost intuitive by the time you finish reading. At its heart is a straightforward account of a structural late-medieval labor crisis."—The Medieval Review

"Examining the English writings of clerics in minor orders without benefices or established positions, Kathryn Kerby-Fulton brings to notice a cohort of 'submerged' authors whose existence and writings have been overlooked. She illuminates in rewarding detail the contexts in which these men wrote and the attitudes they may have shared with contemporaries whose names are better known to modern readers."—Julia Boffey, Queen Mary College, University of London

"Kathryn Kerby-Fulton's arresting thesis is that the explosion of creativity and innovation that marked late medieval English literature resulted from the precarious working conditions of an underemployed yet overeducated elite: the clerks breaking their backs toiling away for Church and State. The Clerical Proletariat and the Resurgence of Medieval English Poetry is a powerful and provocative book written against the grain of established accounts of literary and social history."—Sebastian Sobecki, University of Groningen

"In this rigorously argued book about the literary works produced by underemployed clerics toiling in the professional circles of medieval England, Kathryn Kerby-Fulton offers a riveting account of a generative poetics of vocational crisis. A rare feat that combines the skills of a meticulous literary historian and an ethically committed teacher, the book speaks poignantly and powerfully about lesser-known medieval poets in ways that resonate with the modern precarity of the adjunct or untenured academic laboring for the love of letters."—Arvind Thomas, University of California, Los Angeles

"With a masterful blend of critical rigor, empathetic engagement, and deep familiarity with manuscripts and archives, Kathryn Kerby-Fulton offers us a new explanation for the resurgence of English literary writing in the later Middle Ages. Career disappointment, she argues, prompted unbeneficed clerics to bring their training and talent to new audiences in new ways and to do so with inventive and impassioned attention to human suffering and injustice. This is literary history at its best-and a timely and resonant meditation on the uses of adversity."—Sarah McNamer, Georgetown University

"Confidently melding social history, labor theory, and literary formalism, this vigorous book is a stunning feat of scholarship that delivers stark new insights about the making of English literature from 1200 to the Reformation. Kerby-Fulton shows us an England brimming with highly educated yet woefully underemployed men-the unbeneficed clerical proletariat-who labored in the liminal space between ecclesiastical and lay worlds, and bared the scars of their vocational struggle in vernacular writings."—Susanna Fein, Kent State University