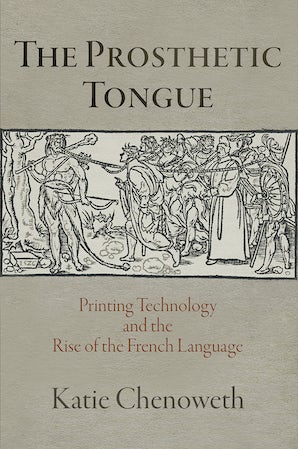 Printing Technology and the Rise of the French Language

Of all the cultural "revolutions" brought about by the development of printing technology during the sixteenth century, perhaps the most remarkable but least understood is the purported rise of European vernacular languages. It is generally accepted that the invention of printing constitutes an event in the history of language that has profoundly shaped modernity, and yet the exact nature of this transformation—the mechanics of the event—has remained curiously unexamined.

In The Prosthetic Tongue, Katie Chenoweth explores the relationship between printing and the vernacular as it took shape in sixteenth-century France and charts the technological reinvention of French across a range of domains, from typography, orthography, and grammar to politics, pedagogy, and poetics. Under François I, the king known in his own time as the "Father of Letters," both printing and vernacular language emerged as major cultural and political forces. Beginning in 1529, French underwent a remarkable transformation, as printers and writers began to reimagine their mother tongue as mechanically reproducible. The first accent marks appeared in French texts, the first French grammar books and dictionaries were published, phonetic spelling reforms were debated, modern Roman typefaces replaced gothic scripts, and French was codified as a legal idiom.

This was, Chenoweth argues, a veritable "new media" moment, in which the print medium served as the underlying material apparatus and conceptual framework for a revolutionary reinvention of the vernacular. Rather than tell the story of the origin of the modern French language, however, she seeks to destabilize this very notion of "origin" by situating the cultural formation of French in a scene of media technology and reproducibility. No less than the paper book issuing from sixteenth-century printing presses, the modern French language is a product of the age of mechanical reproduction.

"Much has been written about the role of print technologies in the early history of national languages in Europe. Benedict Anderson’s line of thinking about nation states as imaginary communities, both delimited and created by the rise of local vernacular languages made into preservable idioms by print, however, is probably the one that continues to generate the most engaging scholarship across the disciplines. Katie Chenoweth’s book is one example of such authoritative contributions. The Prosthetic Tongue is a beautifully written and engaging text."—Language In Society

"Smart and persuasive, The Prosthetic Tongue presents an authoritative contribution to our understanding of the relationship between the printing revolution and the emergence of national languages in the Renaissance. Its detailed and theoretically informed analysis deserves to be closely read, and its arguments engaged with seriously, by historians and literary scholars who deal with print and linguistics in this period."—Adrian Johns, University of Chicago

"Katie Chenoweth tells an ambitious and extremely compelling story of the birth of the modern French language from a wholly new perspective, namely by emphasizing print technology's role in the creation of a so-called mother tongue."—Phillip John Usher, New York University