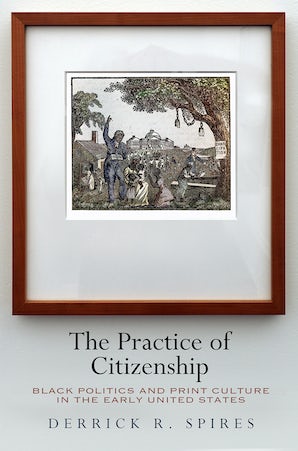 The Practice of Citizenship

Black Politics and Print Culture in the Early United States

In the years between the American Revolution and the U.S. Civil War, as legal and cultural understandings of citizenship became more racially restrictive, black writers articulated an expansive, practice-based theory of citizenship. Grounded in political participation, mutual aid, critique and revolution, and the myriad daily interactions between people living in the same spaces, citizenship, they argued, is not defined by who one is but, rather, by what one does.

In The Practice of Citizenship, Derrick R. Spires examines the parallel development of early black print culture and legal and cultural understandings of U.S. citizenship, beginning in 1787, with the framing of the federal Constitution and the founding of the Free African Society by Absalom Jones and Richard Allen, and ending in 1861, with the onset of the Civil War. Between these two points he recovers understudied figures such as William J. Wilson, whose 1859 "Afric-American Picture Gallery" appeared in seven installments in The Anglo-African Magazine, and the physician, abolitionist, and essayist James McCune Smith. He places texts such as the proceedings of black state conventions alongside considerations of canonical figures such as Frances Ellen Watkins Harper and Frederick Douglass.

Reading black print culture as a space where citizenship was both theorized and practiced, Spires reveals the degree to which concepts of black citizenship emerged through a highly creative and diverse community of letters, not easily reducible to representative figures or genres. From petitions to Congress to Frances Harper's parlor fiction, black writers framed citizenship both explicitly and implicitly, the book demonstrates, not simply as a response to white supremacy but as a matter of course in the shaping of their own communities and in meeting their own political, social, and cultural needs.

Introduction. Black Theorizing: Reimagining a "Beautiful but Baneful Object"
Chapter 1. Neighborly Citizenship in Absalom Jones and Richard Allen's A Narrative of the Proceedings of the Black People During the Late and
Awful Calamity in Philadelphia in the Year 1793
Chapter 2. Circulating Citizenship in the Black State Conventions of the 1840s
Chapter 3. Economic Citizenship in Ethiop and Communipaw's New York
Chapter 4. Critical Citizenship in the Anglo-African Magazine, 1859-1860
Chapter 5. Pedagogies of Revolutionary Citizenship
Conclusion. "To Praise Our Bridges"

Derrick R. Spires is Associate Professor of Literatures in English at Cornell University.

""[E]ngaging, powerful, and absolutely necessary . . . In The Practice of Citizenship, Spires theorizes alongside some of the most brilliant and challenging writers of the nineteenth century. But with an ease made all the more impressive because of its seeming effortlessness, Spires has written a detailed and elegant book that offers his readers a well cleared pathway into the world of black theorizing in the nineteenth century, and thus provided us with an opportunity to learn from activist-writers who developed and enacted practices of citizenship that engaged with but refused to be bound by the rules and regulations of a white supremacist state. And as an interpreter of and guide through these practices, Spires models for us black theorizing in the twenty-first century, an approach that is at once scholarly method and ethical imperative. An inspired and inspiring work filled with theories and practices that are as necessary now as they were then, The Practice of Citizenship is, in short, essential reading."—Reviews in American History

"[A]n intelligent and well-researched analysis of how writers of African descent in the New World understood and demonstrated citizenship from the late eighteenth century until the dawn of the Civil War. The Practice of Citizenship offers a robust foundation on which future generations of teachers, students, and researchers could learn more about the creativity and resolve of the African diaspora in its long quest for a citizenship they deserve rightfully and unquestionably to call their own."—Early American Literature

"The Practice of Citizenship is a rare and important book . . . In this beautifully written and theoretically sophisticated study, the author chronicles how Black people conceived and practiced citizenship in spaces including-and perhaps especially-beyond the nation-state form . . . It is as much a theory of contested spaces as it is a philosophy of community."—Modern Philology

"Derrick Spires’ The Practice of Citizenship is a beautifully written and brilliantly evocative work that centres print culture in the early United States as a site for the theorization and practice of citizenship for Black people…Reflecting on this book in the modern era, it is evident that there are historical carryovers as regards the theory and practice of Black citizenship which mark Spires’ work as urgent and necessary in the current moment. It would do well to recall that citizenship ideals and practices advocated by Black thinkers in the early United States, such as collective power, networks and neighborhoods, and critical citizenship, still remain vital in the ongoing twenty-first-century movement for recognition of Black citizenship in the United States, both in theory and in practice."—American Nineteenth Century History

"Derrick R. Spires orchestrates insightful readings of both the most important and underutilized touchstones in early Black print studies like a master conductor. By having an array of early Black authors, events, and exchanges in play together and by amplifying how early Black writers and communities created, enlivened, and sustained collective advocacy, Spires's work is poised to significantly expand the canon of nineteenth-century texts scholars write about and teach. The Practice of Citizenship is a considerable achievement."—P. Gabrielle Foreman, University of Delaware