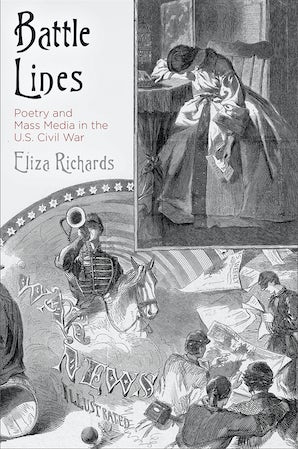 Poetry and Mass Media in the U.S. Civil War

During the U.S. Civil War, a combination of innovative technologies and catastrophic events stimulated the development of news media into a central cultural force. Reacting to the dramatic increases in news reportage and circulation, poets responded to an urgent need to make their work immediately relevant to current events. As poetry's compressed forms traveled more quickly and easily than stories, novels, or essays through ephemeral print media, it moved alongside and engaged with news reports, often taking on the task of imagining the mental states of readers on receiving accounts from the war front. Newspaper and magazine poetry had long editorialized on political happenings—Indian wars, slavery and abolition, prison reform, women's rights—but the unprecedented scope of what has been called the first modern war, and the centrality of the issues involved for national futures, generated a powerful sense of single-mindedness among readers and writers that altered the terms of poetic expression.

In Battle Lines, Eliza Richards charts the transformation of Civil War poetry, arguing that it was fueled by a symbiotic relationship between the development of mass media networks and modern warfare. Focusing primarily on the North, Richards explores how poets working in this new environment mediated events via received literary traditions. Collectively and with a remarkable consistency, poems pulled out key features of events and drew on common tropes and practices to mythologize, commemorate, and ponder the consequences of distant battles. The lines of communication reached outward through newspapers and magazines to writers such as Dickinson, Whitman, and Melville, who drew their inspiration from their peers' poetic practices and reconfigured them in ways that bear the traces of their engagements.

Introduction. "How News Must Feel When Traveling"
Chapter 1. "Strange Analogies": Weathering the War
Chapter 2. The "Ghastly Harvest"
Chapter 3. "To Signalize the Hour": Memorialization and the Massachusetts 54th
Chapter 4. Poetry Under Siege: Charleston Harbor's Talking Guns
Chapter 5. Poetry at Sea: Naval Ballads and the Battle of Mobile Bay
Epilogue. Writing's Wars: Stephen Crane's Poetry and the Postbellum Turn to the Page

"Battle Lines should be read by every scholar of nineteenth-century American literature and culture as well as by any interested reader who enjoys American poetry. The book packs a lot of information in relatively short compass and it is a jargon-free and non-technical joy to read. Richards has established a heretofore relatively neglected field in American literature that deserves further thoughtful and astute attention that she pioneers in her own work."—American Literary Realism

"Battle Lines is exciting and groundbreaking. Eliza Richards argues that the poetry of the Civil War was distinctive for its intimate relationship to new, and newly networked, forms of media. Her ingenious interpretations show how the war's mediated events fundamentally shaped both the form and content of its poems."—Elizabeth Young, Mount Holyoke College

"Eliza Richards has written a tight, elegant book that demonstrates how pervasively the poetry of the Civil War reflects on its technologically mediated conditions, composition, and circulation."—Mary Loeffelholz, Northeastern University

"A prolific essayist, Richards has honed her ability to connect poems and the circumstances framing their creation to good effect…Richards deserves praise for teasing out in elegant fashion the impacts of the Civil War on American poetry and its production and consumption."—American Nineteenth Century Histoy