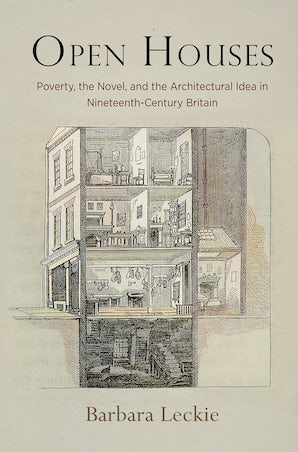 Poverty, the Novel, and the Architectural Idea in Nineteenth-Century Britain

In the 1830s and '40s, a new preoccupation with the housing of the poor emerged in British print and visual culture. In response to cholera outbreaks, political unrest, and government initiatives, commentators evinced a keen desire to document housing conditions and agitate for housing reform. Consistently and strikingly, these efforts focused on opening the domestic interiors of the poor to public view. In Open Houses, Barbara Leckie addresses the massive body of print materials dedicated to convincing the reader of the wretchedness, unworthiness, and antipoetic quality of the living conditions of the poor and, accordingly, the urgent need for architectural reform. Putting these exposés into dialogue with the Victorian novel and the architectural idea (the manipulation of architecture and the built environment to produce certain effects), she illustrates the ways in which "looking into" the house animated new models for social critique and fictional form.

As housing conditions failed to improve despite the ubiquity of these documentary and fictional exposés, commentators became increasingly skeptical about the capacity of print to generate change. Focusing on Bleak House, Middlemarch, and The Princess Casamassima, Leckie argues that writers offered a persuasive counterargument for the novel's intervention in social debates. Open Houses returns the architectural idea to the central position it occupied in nineteenth-century England and reconfigures how we understand innovations in the genre of the novel, the agitation for social reform, and the contours of nineteenth-century modernity.

Introduction. "Let Us Look Into the House" 1
Chapter 1. A Simple Idea of Architecture
Chapter 2. The Dark Side of the Interior
Chapter 3. "The Ruined House": Charles Dickens's Bleak House
Chapter 4. The Mediating Imagination: George Eliot's Middlemarch
Chapter 5. The Interpenetrating Imagination: Henry James's The Princess Casamassima
Conclusion. The Epistemology of the House

"[Leckie's] comparative and innovative readings of classic novels are fresh, informative, and full of interesting details . . . [E]fforts to tell an alternative story of nineteenth-century modernity by connecting housing reform documentary literature and British novels are appreciated and should be taken seriously."—Modern Language Review

"[An] important and impressive work . . . Open Houses provides not only superb readings of recovered documentary and canonical literary sources, it also provides a model for scholarship rooted in politics . . .[Leckie] provides us with an important re-examination of housing in nineteenth-century Britain and British fiction, with an eye toward the problem Martin Heidegger raises: how should we understand the role of the home in an age of precarity and poverty."—Romance, Revolution & Reform

"Open Houses is a stimulating, provocative book convincingly underpinned by extensive research, sharp critical readings, and a confident familiarity with current theory. Barbara Leckie is an excellent critic of nineteenth-century fiction, but her conspicuous achievement is to bring fictional and nonfictional writings in dialogue with one another in a way that sheds light on both."—Kate Flint, University of Southern California