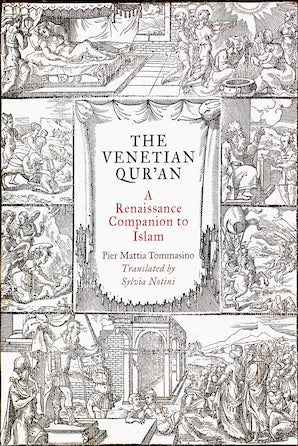 A Renaissance Companion to Islam

An anonymous book appeared in Venice in 1547 titled L'Alcorano di Macometto, and, according to the title page, it contained "the doctrine, life, customs, and laws [of Mohammed] . . . newly translated from Arabic into the Italian language." Were this true, L'Alcorano di Macometto would have been the first printed direct translation of the Qur'an in a European vernacular language. The truth, however, was otherwise. As soon became clear, the Qur'anic sections of the book—about half the volume—were in fact translations of a twelfth-century Latin translation that had appeared in print in Basel in 1543. The other half included commentary that balanced anti-Islamic rhetoric with new interpretations of Muhammad's life and political role in pre-Islamic Arabia. Despite having been discredited almost immediately, the Alcorano was affordable, accessible, and widely distributed.

In The Venetian Qur'an, Pier Mattia Tommasino uncovers the volume's mysterious origins, its previously unidentified author, and its broad, lasting influence. L'Alcorano di Macometto, Tommasino argues, served a dual purpose: it was a book for European refugees looking to relocate in the Ottoman Empire, as well as a general Renaissance reader's guide to Islamic history and stories. The book's translation and commentary were prepared by an unknown young scholar, Giovanni Battista Castrodardo, a complex and intellectually accomplished man, whose commentary in L'Alcorano di Macometto bridges Muhammad's biography and the text of the Qur'an with Machiavelli's The Prince and Dante's Divine Comedy. In the years following the publication of L'Alcorano di Macometto, the book was dismissed by Arabists and banned by the Catholic Church. It was also, however, translated into German, Hebrew, and Spanish and read by an extended lineage of missionaries, rabbis, renegades, and iconoclasts, including such figures as the miller Menocchio, Joseph Justus Scaliger, and Montesquieu. Through meticulous research and literary analysis, The Venetian Qur'an reveals the history and legacy of a fascinating historical and scholarly document.

Chapter 1. The Misfortune of a Translation
Chapter 2. The Material Text: Three States, One Edition, a History Book
Chapter 3. "What Everybody Wishes for and Keeps Silent": Analysis of the Context Through the Paratext
Chapter 4. "And He Translated the Alcorano in the Vulgar Tongue": Giovanni Battista Castrodardo, Translator of the Alcorano di Macometto
Chapter 5. The Iberian and Italian Mi'rāǧ by Giovanni Battista Castrodardo: An Unknown Dante Scholar and Muhammad's Ascension into Heaven
Chapter 6. The Religion of the Italians, or Purgatory and the Qur'an: A Belief and a Place Between Robert of Ketton and Roberto Bellarmino
Chapter 7. Scribendae Historiae Gratia: The Oration of Sergius the Monk to the Prophet Muhammad
Chapter 8. Reading and Rewriting the Alcorano di Macometto: Francesco Sansovino Between the Historie Universali and the Selve
Chapter 9. A Cheese Maker from Lucca and a Miller from Friuli
Chapter 10. The Fortune of the Alcorano di Macometto and a Conclusion

"The Venetian Qur'an is an impressively rich study. It is a model of multidisciplinary research, drawing on historical, literary, and linguistic approaches."—Thomas E. Burman, University of Notre Dame

"A philological masterwork that introduces readers to a shadowy figure who was central to the intellectual life of his age. It is meticulously argued, encompassing early modern Italian literature, intellectual history, and the history of Orientalism, as well as Reformation-era European religious studies."—Karla Mallette, University of Michigan