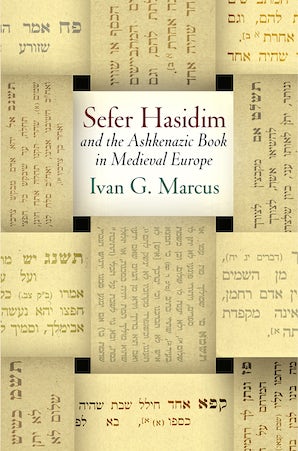 "Sefer Hasidim" and the Ashkenazic Book in Medieval Europe

Composed in Germany in the early thirteenth century by Judah ben Samuel he-hasid, Sefer Hasidim, or "Book of the Pietists," is a compendium of religious instruction that portrays the everyday life of Jews as they lived together with and apart from Christians in towns such as Speyer, Worms, Mainz, and Regensburg. A charismatic religious teacher who recorded hundreds of original stories that mirrored situations in medieval social living, Judah's messages advocated praying slowly and avoiding honor, pleasure, wealth, and the lures of unmarried sex. Although he failed to enact his utopian vision of a pietist Jewish society, his collected writings would help shape the religious culture of Ashkenazic Judaism for centuries.

In "Sefer Hasidim" and the Ashkenazic Book in Medieval Europe, Ivan G. Marcus proposes a new paradigm for understanding how this particular book was composed. The work, he contends, was an open text written by a single author in hundreds of disjunctive, yet self-contained, segments, which were then combined into multiple alternative versions, each equally authoritative. While Sefer Hasidim offers the clearest example of this model of composition, Marcus argues that it was not unique: the production of Ashkenazic books in small and easily rearranged paragraphs is a literary and cultural phenomenon quite distinct from anything practiced by the Christian authors of northern Europe or the Sephardic Jews of the south. According to Marcus, Judah, in authoring Sefer Hasidim in this manner, not only resisted Greco-Roman influences on Ashkenazic literary form but also extended an earlier Byzantine rabbinic tradition of authorship into medieval European Jewish culture.

"Ivan G. Marcus lays out in a new way how Sefer Hasidim develops and functions as an Ashkenazic book. The summary, assessment, and synthesis of prior research he presents is enlightening and helpful."—Ephraim Kanarfogel, Yeshiva University