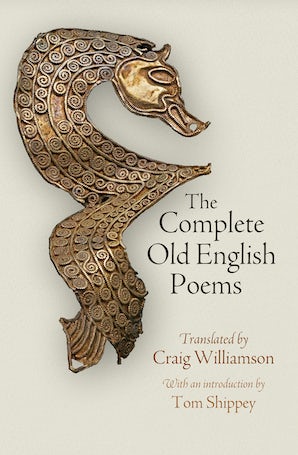 From the riddling song of a bawdy onion that moves between kitchen and bedroom to the thrilling account of Beowulf's battle with a treasure-hoarding dragon, from the heart-rending lament of a lone castaway to the embodied speech of the cross upon which Christ was crucified, from the anxiety of Eve, who carries "a sumptuous secret in her hands / And a tempting truth hidden in her heart," to the trust of Noah who builds "a sea-floater, a wave-walking / Ocean-home with rooms for all creatures," the world of the Anglo-Saxon poets is a place of harshness, beauty, and wonder.

Now for the first time, the entire Old English poetic corpus—including poems and fragments discovered only within the past fifty years—is rendered into modern strong-stress, alliterative verse in a masterful translation by Craig Williamson.

Accompanied by an introduction by noted medievalist Tom Shippey on the literary scope and vision of these timeless poems and Williamson's own introductions to the individual works and his essay on translating Old English poetry, the texts transport us back to the medieval scriptorium or ancient mead-hall, to share a herdsman's recounting of the story of the world's creation or a people's sorrow at the death of a beloved king, to be present at the clash of battle or to puzzle over the sacred and profane answers to riddles posed over a thousand years ago. This is poetry as stunning in its vitality as it is true to its sources. Were Williamson's idiom not so modern, we might think that the Anglo-Saxon poets had taken up the lyre again and begun to sing once more.

Introduction, by Tom Shippey
Note on the Texts, Titles, and Organization of the Poems
List of Abbreviations

The Vercelli Book
—Introduction
—Andreas: Andrew in the Country of the Cannibals
—The Fates of the Apostles
—Soul and Body I
—Homiletic Fragment I: On Human Deceit
—The Dream of the Rood
—Elene: Helena's Discovery of the True Cross

The Exeter Book
—Introduction
—Christ I: Advent Lyrics
—Christ II: The Ascension
—Christ III: Judgment
—Guthlac A
—Guthlac B
—Azarias: The Suffering and Songs of the Three Youths
—The Phoenix
—Juliana
—The Wanderer
—The Gifts of Men
—Precepts: A Father's Instruction
—The Seafarer
—Vainglory
—Widsith
—The Fortunes of Men
—Maxims I: Exeter Maxims (A, B, and C)
—The Order of the World
—The Rhyming Poem
—Physiologus I: The Panther
—Physiologus II: The Whale
—Physiologus III: Partridge or Phoenix
—Homiletic Fragment III: God's Bright Welcome
—Soul and Body II
—Deor
—Wulf and Eadwacer
—Riddles 1-57
—The Wife's Lament
—Judgment Day I
—Resignation A: The Penitent's Prayer
—Resignation B: The Exile's Lament
—The Descent into Hell
—Almsgiving
—Pharaoh
—The Lord's Prayer I
—Homiletic Fragment II: Turn Toward the Light
—Riddles 28b and 58
—The Husband's Message
—The Ruin
—Riddles 59-91

The Minor Poems
—Introduction
—The Fight at Finnsburg
—Waldere
—The Battle of Maldon
—The Poems of The Anglo-Saxon ChronicleThe Battle of Brunanburg (937)The Capture of the Five Boroughs (942)The Coronation of Edgar (973)The Death of Edgar (975)The Death of Alfred (1036)The Death of Edward (1065)
—Durham
—The Rune Poem
—Solomon and Saturn I
—Solomon and Saturn II
—The Menologium: A Calendar Poem
—Maxims II: Cotton Maxims
—A Proverb from Winfrid's Time
—Judgment Day II
—The Rewards of Piety
—The Lord's Prayer II
—The Gloria I
—The Lord's Prayer III
—The Creed
—Fragments of Psalms
—The Kentish Hymn
—Psalm 50
—The Gloria II
—A Prayer
—Thureth
—The Book's Prologue to Aldhelm's De virginitate
—The Seasons for Fasting
—Cædmon's Hymn
—Bede's Death Song
—The Leiden Riddle
—Latin-English Proverbs
—The Metrical Preface to The Pastoral Care
—The Metrical Epilogue to The Pastoral Care
—The Metrical Preface to Gregory's Dialogues
—Colophon to Bede's Ecclesiastical History
—The Ruthwell Cross
—The Brussels Cross
—The Franks Casket
—The Metrical CharmsCharm for Unfruitful LandNine Herbs CharmCharm Against a DwarfCharm for a Sudden StitchCharm for Loss of Property or CattleCharm for a Difficult or Delayed BirthCharm for the Water-Elf-DiseaseCharm for a Swarm of BeesCharm for a Theft of CattleCharm for Loss of Property or CattleJourney CharmCharm Against Wens (or Tumors)
Additional Poems
—Introduction
—Additional Poems of The Anglo-Saxon ChronicleThe Accession of Edgar (959)Prince Edward's Return (1057)Malcolm and Margaret (1067)The Wedding Conspiracy Against King William (1075)The Rhyme of King William (1086)The Suffering Under King Henry (1104)
—Captions for Drawings
—Cnut's Song
—Distich: Psalm 17:51
—Distich on Kenelm
—Distich on the Sons of Lothebrok—Five Memorial Stone InscriptionsDewsbury Memorial (or Stone Cross)Falstone Hogback MemorialGreat Urswick MemorialOverchurch MemorialThornhill III Memorial
—Genealogical Verse
—Godric's Hymns
—The Grave
—Honington Clip
—Instructions for Christians
—Lament for the English Church (From the Worcester Fragments)
—Lancashire Gold Ring
—Metrical Psalms 90:15-95:2
—The Soul's Address to the Body (From the Worcester Fragments)
—Sutton Disc Brooch
—Two Marginalic Lines
—Verse in a Charter
—Verse in a Homily: The Judgment of the Damned
—Verse Paraphrase of Matthew 25:41
—Verse Proverb in a Junius Homily
—Verses in Vercelli Homily XXI

"Here a whole poetic culture is laid out in all its richness and variety. . . . The translations are not literal, nor are they intended to be, but they convey with flair the meanings and rhetorical intricacy of the originals. . . . This is an immense book, not just in size but also in achievement: it attests both to the sizeable extant corpus of Old English poetry and to the impressive energy and creativeness of Williamson as translator."—Times Literary Supplement

"What Williamson does is useful as well as beautiful . . . No more hunting about in volumes here and there, and what we have is attractively printed and presented. As literary entities, the translations are excellent. They are fresh, sensitive, and vigorous, avoiding the dead archaisms of many translators, yet still giving an impression of their ancient originals . . . What [Williamson] has done deserves a very warm welcome, as does Tom Shippey's Introduction, with stimulating paragraphs on poetry as the vehicle for eulogy or wisdom. Together, they open windows to let in sunshine and air. They show how, beyond the grim and stuffy classroom of philology, delightful gardens and wild moorlands await discovery."—Modern Language Review

"{A] rich and abundant resource. Craig Williamson has produced 'alliterative, strong stress' translations of the surviving corpus of Old English poetry, from the 3,182 lines of Beowulf to the single runic line inscribed on the Overchurch Memorial. The well-worn clichés of Anglo-Saxon Studies are applicable here: Williamson's task was monstrous; his labour was noble; his success is heroic. The Complete Old English Poems is the work of a lifetime."—Translation and Literature

"Craig Williamson's collection of Old English poems in verse translation is a treasure trove of wisdom, heroism, heartache, beauty and humour. The Complete Old English Poems contains recitations that are at once surprisingly familiar and provocatively strange for the modern reader . . . [W]ith its emphasis on artistry, musicality and entertainment, this collection should prove appealing to both the scholar and the student of Old English poetry, and anyone curious about the history of written, spoken and sung verse."—Anglia

"A magnificent contribution that overwhelms the reader with its beauty and its depth, The Complete Old English Poems is much-needed medicine for the soul."—Benjamin Bagby, performer of Beowulf and director of the medieval music ensemble Sequentia

"Craig Williamson's monumental volume takes us 'across the bridge of language that lifts / Over the river of years,' as his dedicatory poem promises. A brilliant poet himself, his translations seamlessly weave together modern and Old English language patterns, and his learned, helpful introductions allow the sophistication and beauty of each poem to be grasped anew. The volume is a gift to generations of medievalists, poetry lovers, and seekers-out of elusive mysteries."—Peggy A. Knapp, Carnegie Mellon University

"It is cause for celebration to have at last a translation of the entire Old English poetic corpus, moreover a rendering that is discerning, nuanced, and poetically crafted. The earliest English verse has never been such a delight to read."—R. D. Fulk, author of An Introductory Grammar of Old English, with an Anthology of Readings

"Craig Williamson's ambitious undertaking-translating the entire corpus of Old English poetry, in all its variety, ambiguity, and alterity-succeeds in providing both an unprecedented resource for scholars and a compelling point of entry into the Anglo-Saxon world for beginners. His introductory remarks to the collection as a whole and to each of the poems take us even further, into a subtle and timely manifesto for the value of the humanities and the work of 'hard listening' that can connect and engage people across profound differences. Like the audiences imagined by the Old English poems themselves, many readers now and in the future will be inspired by Williamson's learned, loving new articulation of old voices."—Elaine Tuttle Hansen, author of Reading Wisdom in Old English Poetry