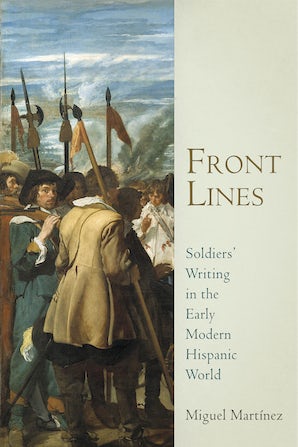 In Front Lines, Miguel Martínez documents the literary practices of imperial Spain's common soldiers. Against all odds, these Spanish soldiers produced, distributed, and consumed a remarkably innovative set of works on war that have been almost completely neglected in literary and historical scholarship. The soldiers of Italian garrisons and North African presidios, on colonial American frontiers and in the traveling military camps of northern Europe read and wrote epic poems, chronicles, ballads, pamphlets, and autobiographies—the stories of the very same wars in which they participated as rank-and-file fighters and witnesses. The vast network of agents and spaces articulated around the military institutions of an ever-expanding and struggling Spanish empire facilitated the global circulation of these textual materials, creating a soldierly republic of letters that bridged the Old and the many New Worlds of the sixteenth and seventeenth centuries.

Martínez asserts that these writing soldiers played a key role in the shaping of Renaissance literary culture, which for its part gave to them the language and forms with which to question received notions of the social logic of warfare, the ethics of violence, and the legitimacy of imperial aggression. Soldierly writing often voiced criticism of established hierarchies and exploitative working conditions, forging solidarities among the troops that often led to mutiny and massive desertion. It is the perspective of these soldiers that grounds Front Lines, a cultural history of Spain's imperial wars as told by the common men who fought them.

"Miguel Martínez has identified something rare in early modern studies, a middle- to working-class republic of letters, rooted in a coherent social practice, and self-consciously set off against its putative betters. Front Lines is not just about war, soldiers, and empires, but about the social location of the Renaissance."—Ricardo Padrón, University of Virginia

"Front Lines highlights a series of 'gunpowder epics' whose aesthetic and ideological priorities openly defied those of both learned epic and Carolingian romance. I know of no other work that evokes so fully the existence of an entire subculture of soldier-writers with their bracingly direct take on military life and often experimental way with received genres."—Michael Armstrong-Roche, Wesleyan University