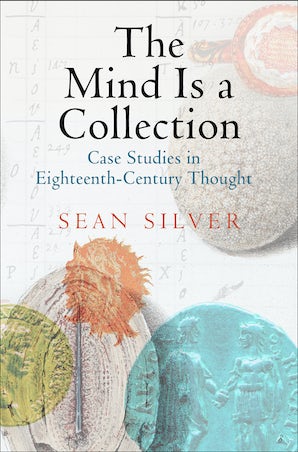 The Mind Is a Collection

John Locke described the mind as a cabinet; Robert Hooke called it a repository; Joseph Addison imagined a drawer of medals. Each of these philosophers was an avid collector and curator of books, coins, and cultural artifacts. It is therefore no coincidence that when they wrote about the mental work of reason and imagination, they modeled their powers of intellect in terms of collecting, cataloging, and classification.

The Mind Is a Collection approaches seventeenth- and eighteenth-century metaphors of the mind from a material point of view. Each of the book's six chapters is organized as a series of linked exhibits that speak to a single aspect of Enlightenment philosophies of mind. From his first chapter, on metaphor, to the last one, on dispossession, Sean Silver looks at ways that abstract theories referred to cognitive ecologies—systems crafted to enable certain kinds of thinking, such as libraries, workshops, notebooks, collections, and gardens. In doing so, he demonstrates the crossings-over of material into ideal, ideal into material, and the ways in which an idea might repeatedly turn up in an object, or a range of objects might repeatedly stand for an idea. A brief conclusion examines the afterlife of the metaphor of mind as collection, as it turns up in present-day cognitive studies. Modern cognitive theory has been applied to the microcomputer, and while the object is new, the habit is as old as the Enlightenment.

By examining lived environments and embodied habits from 1660 to 1800, Silver demonstrates that the philosophical dualism that separated mind from body and idea from thing was inextricably established through active engagement with crafted ecologies.

Preface: Welcome to the Museum
Introduction

Case 2. Design
4. Robert Hooke's Camera Obscura
5. Raphael's Judgment of Paris
6. A Gritty Pebble
7. An Oval Portrait of John Woodward
8. A Stone from the Grotto of Egeria
9. Venus at Her Toilet

Case 4. Inwardness
15. William Hay's Stone
16. Two Calculi Cut and Mounted in a Small Showcase
17. An Ampulla of the Blood of Thomas Becket
18. A Blue-Bound Copy of The Mysterious Mother

Case 5. Conception
19. A Blank Sheet of Paper (1)
20. A Folio Sheet with Two Sketches of a Single Conception
21. A Triumph of Galatea
22. Joshua Reynolds, William Hunter

"Sean Silver is inspired by Bruno Latour to turn taxonomies into something more mobile and unexpected, representations of knowledge on the one hand and notices of privacy on the other. But it is Latour with a spice of Shandeism, where grand projects can end up as blank paper and noble conceptions as wind and water. Silver shows how risky his kind of network can be."—Jonathan Lamb, Vanderbilt University