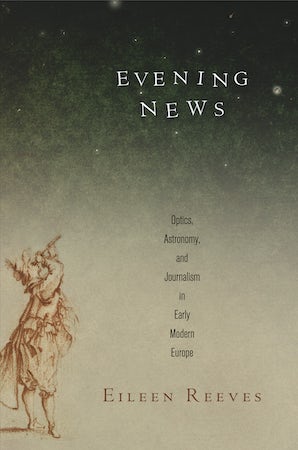 Eileen Reeves examines a web of connections between journalism, optics, and astronomy in early modern Europe, devoting particular attention to the ways in which a long-standing association of reportage with covert surveillance and astrological prediction was altered by the near simultaneous emergence of weekly newsheets, the invention of the Dutch telescope, and the appearance of Galileo Galilei's astronomical treatise, The Starry Messenger.

Early modern news writers and consumers often understood journalistic texts in terms of recent developments in optics and astronomy, Reeves demonstrates, even as many of the first discussions of telescopic phenomena such as planetary satellites, lunar craters, sunspots, and comets were conditioned by accounts of current events. She charts how the deployment of particular technologies of vision—the telescope and the camera obscura—were adapted to comply with evolving notions of objectivity, censorship, and civic awareness. Detailing the differences between various types of printed and manuscript news and the importance of regional, national, and religious distinctions, Evening News emphasizes the ways in which information moved between high and low genres and across geographical and confessional boundaries in the first decades of the seventeenth century.

"A magisterial book that will appeal to readers interested in early modern cultural and social history as well as the history of science and astronomy. Eileen Reeves shows how the dark room, the spyglass, and the telescope offered material for describing all the known and less known features of information in the early seventeenth century, from speed to tardiness, from accuracy to unreliability, from exclusivity to intermediation."—Filippo De Vivo, Birkbeck College, University of London

"Evening News convincingly demonstrates the entanglement of journalism and the news with optics and astronomy. Discovered snippets of private correspondence and other minute pieces of text, close readings of these passages, and connections to historical contexts manifest the author's impressive erudition."—Sven Dupré, Max Planck Institute for the History of Science