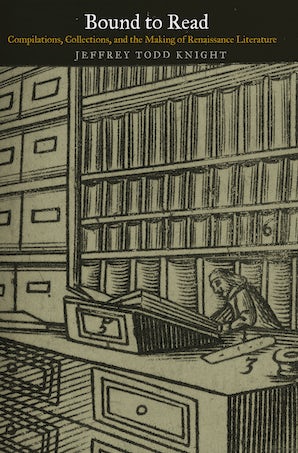 Compilations, Collections, and the Making of Renaissance Literature

Concealed in rows of carefully restored volumes in rare book libraries is a history of the patterns of book collecting and compilation that shaped the literature of the English Renaissance. In this early period of print, before the introduction of commercial binding, most published literary texts did not stand on shelves in discrete, standardized units. They were issued in loose sheets or temporarily stitched—leaving it to the purchaser or retailer to collect, configure, and bind them. In Bound to Read, Jeffrey Todd Knight excavates this culture of compilation—of binding and mixing texts, authors, and genres into single volumes—and sheds light on a practice that not only was pervasive but also defined the period's very ways of writing and thinking.

Through a combination of archival research and literary criticism, Knight shows how Renaissance conceptions of imaginative writing were inextricable from the material assembly of texts. While scholars have long identified an early modern tendency to borrow and redeploy texts, Bound to Read reveals that these strategies of imitation and appropriation were rooted in concrete ways of engaging with books. Knight uncovers surprising juxtapositions such as handwritten sonnets collected with established poetry in print and literary masterpieces bound with liturgical texts and pamphlets. By examining works by Shakespeare, Spenser, Montaigne, and others, he dispels the notion of literary texts as static or closed, and instead demonstrates how the unsettled conventions of early print culture fostered an idea of books as interactive and malleable.

Though firmly rooted in Renaissance culture, Knight's carefully calibrated arguments also push forward to the digital present—engaging with the modern library archives where these works were rebound and remade, and showing how the custodianship of literary artifacts shapes our canons, chronologies, and contemporary interpretative practices.

PART I. READERS
Chapter 1. Special Collections: Book Curatorship and the Idea of Early Print in Libraries
Chapter 2. Making Shakespeare's Books: Material Intertextuality from the Bindery to the Conservation Lab

"Bound to Read is an enormously learned and yet always energetically written account of book collecting practices in early modern England. Making available to our view a material history of early modern books that later practices of text collecting and transmission ignored, or worse, obliterated, Knight brilliantly challenges a set of widely held and long-cherished assumptions about reading practices, about the literature we read, and about the literary histories we depend upon."—David Scott Kastan, Yale University

"Bound to Read is meticulously researched, absolutely stuffed with new facts about fascinating old books, elegantly written, cogently argued, and a genuinely new contribution to the history of the book."—Alexandra Gillespie, University of Toronto