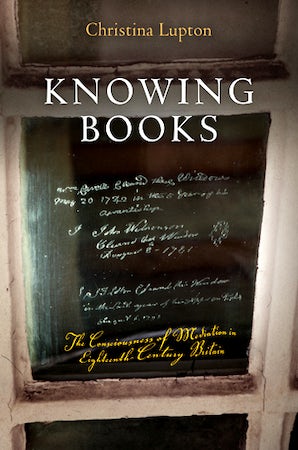 The Consciousness of Mediation in Eighteenth-Century Britain

The eighteenth century has long been associated with realism and objective description, modes of representation that deemphasize writing. But in the middle decades of the century, Christina Lupton observes, authors described with surprising candor the material and economic facets of their own texts' production. In Knowing Books Lupton examines a variety of eighteenth-century sources, including sermons, graffiti, philosophical texts, and magazines, which illustrate the range and character of mid-century experiments with words announcing their status as physical objects. Books that "know" their own presence on the page and in the reader's hand become, in Lupton's account, tantalizing objects whose entertainment value competes with that of realist narrative.

Knowing Books introduces these mid-eighteenth-century works as part of a long history of self-conscious texts being greeted as fashionable objects. Poststructuralist and Marxist approaches to literature celebrate the consciousness of writing and economic production as belonging to revolutionary understandings of the world, but authors of the period under Lupton's gaze expose the facts of mediation without being revolutionary. On the contrary, their explication of economic and material processes shores up their claim to material autonomy and economic success. Lupton uses media theory and close reading to suggest the desire of eighteenth-century readers to attribute sentience to technologies and objects that entertain them.

Rather than a historical study of print technology, Knowing Books offers a humanist interpretation of the will to cede agency to media. This horizon of theoretical engagement makes Knowing Books at once an account of the least studied decades of the eighteenth century and a work of relevance for those interested in new attitudes toward media in the twenty-first.

"Knowing Books demonstrates how ideas can be shaped by the physical form in which they are conveyed. It recovers historical reactions to new technologies and the way in which those new processes were inscribed in writing. It is a study of mediation registered in discourse and as such is a notable extension of the recent characterization of the Enlightenment as a 'media event.'"—TLS

"Compellingly argued, original in its approach and insights, thoroughly researched, and ranging widely in the theoretical voices it invokes, Knowing Books opens up fresh ways of thinking about the eighteenth century. The project capitalizes on some of the most exciting work in the fields of book history, media studies, materiality, and 'thing theory,' and applies it to a body of texts until recently slighted in traditional literary histories of the period."—Lynn Festa, Rutgers University