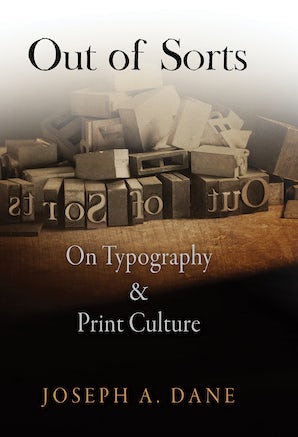 On Typography and Print Culture

by Joseph A. Dane

The new history of the book has constituted a vibrant academic field in recent years, and theories of print culture have moved to the center of much scholarly discourse. One might think typography would be a basic element in the construction of these theories, yet if only we would pay careful attention to detail, Joseph A. Dane argues, we would find something else entirely: that a careful consideration of typography serves not as a material support to prevailing theories of print but, rather, as a recalcitrant counter-voice to them.

In Out of Sorts Dane continues his examination of the ways in which the grand narratives of book history mask what we might actually learn by looking at books themselves. He considers the differences between internal and external evidence for the nature of the type used by Gutenberg and the curious disconnection between the two, and he explores how descriptions of typesetting devices from the seventeenth and eighteenth centuries have been projected back onto the fifteenth to make the earlier period not more accessible but less. In subsequent chapters, he considers topics that include the modern mythologies of so-called gothic typefaces, the presence of nontypographical elements in typographical form, and the assumptions that underlie the electronic editions of a medieval poem or the visual representation of typographical history in nineteenth-century studies of the subject.

Is Dane one of the most original or most traditional of historians of print? In Out of Sorts he demonstrates that it may well be possible to be both things at once.

PART I . OUT OF SORTS
Chapter One. On the Continuity of Continuity: Print Culture Mythology and the Type of the Gutenberg Bible (B42)
Chapter Two. Gottfried Zedler and the Twentieth-Century History of DK Type
Chapter Three. The Voodoo Economics of Space: From Gothic to Roman
Chapter Four. The Typographical Gothic: A Cautionary Note on the Title Page to Percy's Reliques of Ancient English Poetry

INTERLUDE
At the Typographical Altar: Interlude for Randall McLeod

"Joseph Dane is known for writings that are learned, witty, and provocative; and his latest collection of essays is a further display of his idiosyncratic approach to scholarship and history."—Common Knowledge

"Joseph A. Dane has been the most provocative and idiosyncratic of bibliographical scholars. His own scholarship develops through intensely technical studies of artifacts and phenomena-a particular title page, a particular mechanism in the print shop, the work of a particular printer or editor-that create a broader narrative arc, the primary goal of which is to unmask assumptions that he often calls 'myths.' His work has the precision of the best people in the field, combined with an ironic stance and an imaginative archival sensibility."—Seth Lerer, University of California, San Diego