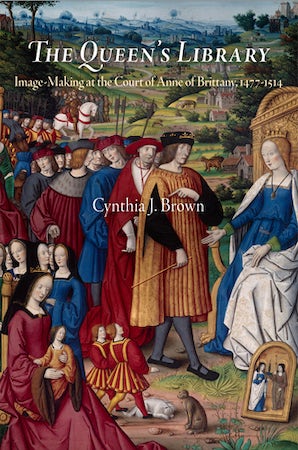 What do the physical characteristics of the books acquired by elite women in the late medieval and early modern
periods tell us about their owners, and what in particular can their illustrations—especially their illustrations of women—reveal? Centered on Anne, duchess of Brittany and twice queen of France, with reference to her contemporaries and successors, The Queen's Library examines the cultural issues surrounding female modes of empowerment and book production. The book aims to uncover the harmonies and conflicts that surfaced in male-authored, male-illustrated works for and about women.

In her interdisciplinary investigation of the cultural and political legacy of Anne of Brittany and her female contemporaries, Cynthia J. Brown argues that the verbal and visual imagery used to represent these women of influence was necessarily complex because of its inherently conflicting portrayal of power and subordination. She contends that it can be understood fully only by drawing on the intersection of pertinent literary, historical, codicological, and art historical sources. In The Queen's Library, Brown examines depictions of women of power in five spheres that tellingly expose this tension: rituals of urban and royal reception; the politics of female personification allegories; the "famous-women" topos; women in mourning; and women mourned.

"The Queen's Library advances new ways of understanding famous women in politics by examining what they read, and by investigating the literary, artistic-and ultimately political-means deployed, consciously or unconsciously, by the makers of the books they owned."—François Rigolot, Princeton University