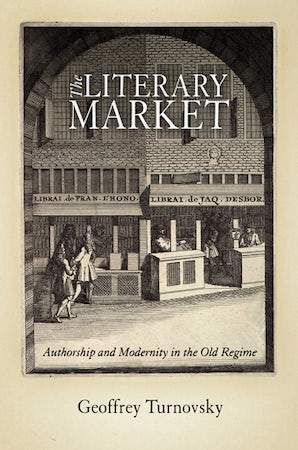 Authorship and Modernity in the Old Regime

A central theme in the history of Old Regime authorship highlights the opportunities offered by a growing book trade to writers seeking to free themselves from patrons and live "by the pen." Accounts of this passage from patronage to market have explored in far greater detail the opportunities themselves—the rising sums paid by publishers and the progression of laws protecting literary property—than how and why writers would have seized on them, no doubt because the choice to do so has seemed an obvious or natural one for writers assumed to prefer economic self-sufficiency over elite protection.

In The Literary Market, Geoffrey Turnovsky claims that there was nothing obvious or natural about the choice. Writers had been involved in commercial book publication since the earliest days of the printing press, yet had not necessarily linked these activities with their freedom to think and write. The association of autonomy and professionalism was forged, not given. Analyzing the literary market as a key articulation of the association, Turnovsky explores how in eighteenth-century polemics a rhetoric of commercial authorship came to signify independence for intellectuals. He finds the roots of the connection not in the claims of entrepreneurial writers to rights and income but in a world to which that of the modern author has been contrasted: the aristocratic culture of the seventeenth century. Aristocratic culture, he argues, generated a disparaging view of the professional author as one defined by activities tainting him or her as greedy and arrogant and therefore unworthy of protection and socially isolated. The Literary Market examines the story of the "birth of the author" in terms of the revalorization of this negative trope in Enlightenment-era debates about the radically changing role of writers in society.

PART I. WRITING, PUBLISHING AND LITERARY IDENTITY IN THE "PREHISTORY OF DROIT D'AUTEUR"
Introduction: The Story of a Transition: When and how did writers become "modern"?
1. Literary Commerce in the Age of Honnête Publication
2. The Paradoxes of Enlightenment Publishing

PART II. THE LITERARY MARKET: THE MAKING OF A MODERN CULTURAL FIELD
Introduction: Reconsidering the Alternative
3. "Living By the Pen": Mythologies of Modern Authorial Autonomy
4. Economic Claims and Legal Battles: Writers Turn to the Market
5. The Reality of a New Cultural Field: The Case of Rousseau

"In this ambitious and far-reaching book, Geoffrey Turnovsky sets out to revise and redraw the dominant paradigms of the emergence of the modern author and the relationship of authors to the literary market in seventeenth- and eighteenth-century France. To counteract what has become a series of clichés, Turnovsky's own revisionist narrative offers a richly textured analysis of the complex, often paradoxical representations and rhetorical moves that writers took when negotiating between the conflicted rationales of the institutions of literary and social life in prerevolutionary France."—Elena Russo, Johns Hopkins University