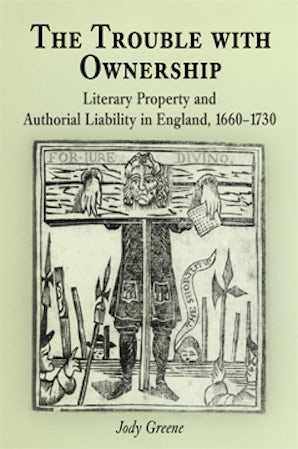 The Trouble with Ownership

Copyright and intellectual property issues are intricately woven into any written work, but the precise nature of this relationship has plagued authors, printers, and booksellers for centuries. What does it mean to own the products of our intellectual labors in our own time? And what was the meaning three centuries ago, when copyright laws were first put into place?

Jody Greene argues that while "owning" one's book is critical to the development of modern notions of authorship, studies of authorial property rights have in fact lost sight of the most critical valence of owning in early modern England: that is, owning up to or taking responsibility for one's work. Greene puts forth what she calls a "paranoid theory of copyright," under which literary property rights are a means of state regulation to assign responsibility for printed works, to identify one person who will step forward and claim the work in exchange for the right to reap the benefits of the literary marketplace. Blending research from legal, historical, and literary archives and drawing on the troubled authorial careers of figures such as Roger L'Estrange, Elizabeth Cellier, Daniel Defoe, John Gay, and Alexander Pope, The Trouble with Ownership looks to the literary culture of early modern England to reveal the intimate relationship between proprietary authorship and authorial liability.

PART I. THE TROUBLE WITH OWNERSHIP
1. Authorship and the Regulation of the Press
2. The Trials of Ownership: Finding the Author in Court

PART II. THE DANGEROUS FATE OF AUTHORS
3. Daniel Defoe, the Act of Anne, and the Obligations of Ownership
4. Revenge of the Straw Woman: Disowning The Dunciad
5. Hostis Humani Generis: Owning Polly

"Greene's book is marvelously smart and analytic, but not just a 'think' book spun out of a few months in the library. The research here is of the hard kind: primary sources, legislative records, court cases. Greene is a real scholar in the classic sense."—John Bender, Stanford University

"Greene's lucid and fluidly written study explores the shifting calculus of ownership as it is worked out in the emerging print culture, a government attempting to keep up in turbulent times, and a legal system predicated on rights arising from property in land and tangible assets."—Eighteenth-Century Fiction

"An excellent book, which covers new ground in the field of the struggle of the press and, most of all, of individual authors . . . in early modern England."—Modern Language Review