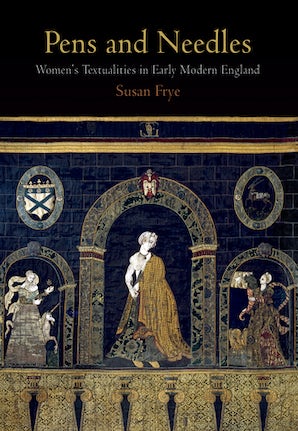 The Renaissance woman, whether privileged or of the artisan or the middle class, was trained in the expressive arts of needlework and painting, which were often given precedence over writing. Pens and Needles is the first book to examine all these forms as interrelated products of self-fashioning and communication.

Because early modern people saw verbal and visual texts as closely related, Susan Frye discusses the connections between the many forms of women's textualities, including notes in samplers, alphabets both stitched and penned, initials, ciphers, and extensive texts like needlework pictures, self-portraits, poetry, and pamphlets, as well as commissioned artwork, architecture, and interior design. She examines works on paper and cloth by such famous figures as Elizabeth I, Mary, Queen of Scots, and Bess of Hardwick, as well as the output of journeywomen needleworkers and miniaturists Levina Teerlinc and Esther Inglis, and their lesser-known sisters in the English colonies of the New World. Frye shows how traditional women's work was a way for women to communicate with one another and to shape their own identities within familial, intellectual, religious, and historical traditions. Pens and Needles offers insights into women's lives and into such literary texts as Shakespeare's Othello and Cymbeline and Mary Sidney Wroth's Urania.

"Susan Frye's book is a beautiful and powerful contribution to scholarship on early modern women's material culture. . . . No other book covers such ground; Pens and Needles is an invaluable resource for art historians, social historians, literary critics, and anyone interested in the material world that early modern women made."—American Historical Review

"Susan Frye's book is most fascinating in drawing out the histories and texts, both written and sewn, of less well-known women, and showing that they saw their needlework as equally articulate, valuable, and artful as their words."—TLS

"Susan Frye's meticulously researched, beautifully illustrated, and brilliantly titled Pens and Needles makes a significant addition to a growing subfield in early modern gender studies: the expressive arts of women's needlework, which Frye sees as a mode of both female self-fashioning and creative communication."—Studies in English Literature 1500-1900

"Frye beautifully succeeds in aligning the different material practices, especially in the surprising discovery of a new portrait of Mary Queen of Scots embroidered by Bess of Hardwick."—Maureen Quilligan, Duke University

"No other book analyzes the combination of visual, textile, and textual modes in relation to early modern women as this one does. Frye draws on a vast range of sources, from comments on the minutiae of Shakespeare's plays, to contemporary translations of the poems of Mary Stuart, to a range of theorists including Michel de Certeau, Marcel Mauss and Karl Marx, to make a complex and convincing argument about women's consciousness and work."—Ann Rosalind Jones, Smith College