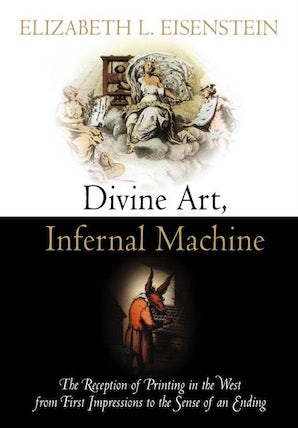 There is a longstanding confusion of Johann Fust, Gutenberg's one-time business partner, with the notorious Doctor Faustus. The association is not surprising to Elizabeth L. Eisenstein, for from its very early days the printing press was viewed by some as black magic. For the most part, however, it was welcomed as a "divine art" by Western churchmen and statesmen. Sixteenth-century Lutherans hailed it for emancipating Germans from papal rule, and seventeenth-century English radicals viewed it as a weapon against bishops and kings. While an early colonial governor of Virginia thanked God for the absence of printing in his colony, a century later, revolutionaries on both sides of the Atlantic paid tribute to Gutenberg for setting in motion an irreversible movement that undermined the rule of priests and kings. Yet scholars continued to praise printing as a peaceful art. They celebrated the advancement of learning while expressing concern about information overload.

In Divine Art, Infernal Machine, Eisenstein, author of the hugely influential The Printing Press as an Agent of Change, has written a magisterial and highly readable account of five centuries of ambivalent attitudes toward printing and printers. Once again, she makes a compelling case for the ways in which technological developments and cultural shifts are intimately related. Always keeping an eye on the present, she recalls how, in the nineteenth century, the steam press was seen both as a giant engine of progress and as signaling the end of a golden age. Predictions that the newspaper would supersede the book proved to be false, and Eisenstein is equally skeptical of pronouncements of the supersession of print by the digital.

The use of print has always entailed ambivalence about serving the muses as opposed to profiting from the marketing of commodities. Somewhat newer is the tension between the perceived need to preserve an ever-increasing mass of texts against the very real space and resource constraints of bricks-and-mortar libraries. Whatever the multimedia future may hold, Eisenstein notes, our attitudes toward print will never be monolithic. For now, however, reports of its death are greatly exaggerated.

Chapter 2. After Luther: Civil War in Christendom
Printing as a Protestant Weapon
Pamphlet Warfare: ''The Media Explosion'' of the 1640s

Chapter 3. After Erasmus: Propelling the Knowledge Industry
Celebrating Technology/Advancement of Learning
Overload: Lost in the Crowd

Chapter 6. The Newspaper Press: The End of Books?

Chapter 7. Toward the Sense of an Ending (Fin de Sie'cle to the Present)

"Eisenstein's research is impressive, reaching far and wide across languages and centuries. Her knowledge of the history of publication engages the wealth of recent scholarship and extends as far back as Roman copyists. . . . Her breadth enables her to identify topoi and their mutations; to observe long-term trends, diminishing ripples, and delayed reactions; and to distinguish what is new or newly dressed in authors' concerns and readers' complaints."—Journal of Scholarly Publishing