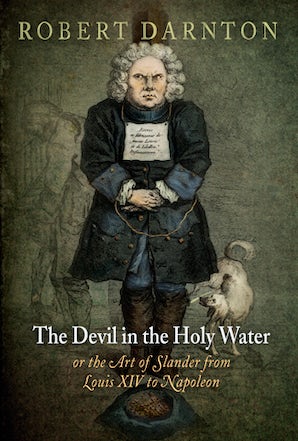 The Devil in the Holy Water, or the Art of Slander from Louis XIV to Napoleon

Slander has always been a nasty business, Robert Darnton notes, but that is no reason to consider it a topic unworthy of inquiry. By destroying reputations, it has often helped to delegitimize regimes and bring down governments. Nowhere has this been more the case than in eighteenth-century France, when a ragtag group of literary libelers flooded the market with works that purported to expose the wicked behavior of the great. Salacious or seditious, outrageous or hilarious, their books and pamphlets claimed to reveal the secret doings of kings and their mistresses, the lewd and extravagant activities of an unpopular foreign-born queen, and the affairs of aristocrats and men-about-town as they consorted with servants, monks, and dancing masters. These libels often mixed scandal with detailed accounts of contemporary history and current politics. And though they are now largely forgotten, many sold as well as or better than some of the most famous works of the Enlightenment.

In The Devil in the Holy Water, Darnton—winner of the National Book Critics Circle Award for his Forbidden Best-Sellers of Pre-Revolutionary France and author of his own best-sellers, The Great Cat Massacre and George Washington's False Teeth—offers a startling new perspective on the origins of the French Revolution and the development of a revolutionary political culture in the years after 1789. He opens with an account of the colony of French refugees in London who churned out slanderous attacks on public figures in Versailles and of the secret agents sent over from Paris to squelch them. The libelers were not above extorting money for pretending to destroy the print runs of books they had duped the government agents into believing existed; the agents were not above recognizing the lucrative nature of such activities—and changing sides.

As the Revolution gave way to the Terror, Darnton demonstrates, the substance of libels changed while the form remained much the same. With the wit and erudition that has made him one of the world's most eminent historians of eighteenth-century France, he here weaves a tale so full of intrigue that it may seem too extravagant to be true, although all its details can be confirmed in the archives of the French police and diplomatic service. Part detective story, part revolutionary history, The Devil in the Holy Water has much to tell us about the nature of authorship and the book trade, about Grub Street journalism and the shaping of public opinion, and about the important work that scurrilous words have done in many times and places.

PART I. INTERLOCKING LIBELS
1. The Armor-Plated Gazetteer
2. The Devil in the Holy Water
3. The Parisian Police Unveiled
4. The Secret Life of Pierre Manuel
5. The End of the Line
6. Bibliography and Iconography
7. Reading

PART II. POLITICS AND POLICE WORK
8. Slander and Politics
9. The Book Police at Work
10. A Double Agent and His Authors
11. Secret Missions
12. Hugger-Mugger
13. Entrapment
14. The View from Versailles
15. The Devil in the Bastille
16. Bohemians Before Bohemianism
17. The Grub Street Route to Revolution
18. Slander into Terror
19. Words and Deeds
20. Postscript, 1802

"Darnton's bravura demonstration of how Old Regime slander was grafted onto the main stem of Revolutionary political culture is one of the highlights of his engaging book. . . . The libellistes seem to have been most effective when their work fitted in with wider political and ideological trends. But their writings certainly complicated and dramatized questions about the limits of free speech as it was used for personal vilification and innuendo. Those were questions with which the Revolutionaries wrestled and never resolved. And they are with us still, and not only in the blogosphere."—Colin Jones, New York Review of Books

"In political slander everything is of the moment, and only someone as immersed as Darnton is in the particularities of eighteenth-century publishing, politics and cultural life could possibly do justice to its noisome unruliness. . . . The reader gets a taste of the thrill of the chase not just from the text but also from a number of telling illustrations taken from the illicit publications themselves. The return on Darnton's investment of time, energy and determination is extraordinary."—Lynn Hunt, London Review of Books

"This is a book for experts on eighteenth-century France; but it is also lucid and scurrilous enough to have much wider appeal. The spectacle of a public figure cut down to size by revelations-true or false-about her or his private life is a literary genre that continues in rude health when more refined forms of writing-literary fiction, criticism and poetry, for example-threaten to become obsolete. Readers will find much to titillate and shock in the slanders that brought les grands of eighteenth-century France to their knees. But there is also a contemporary resonance to consider: as our own voracious yellow press goes from strength to strength and life-writing converges on celebrity biography, the more defamatory the better selling, what can the history of slander and libel teach us?"—Ruth Scurr, The Nation