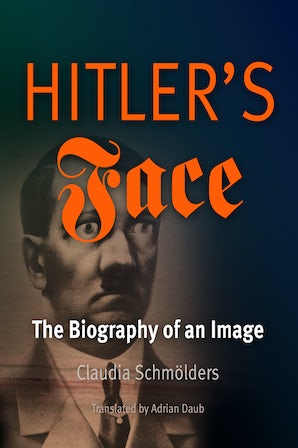 The Biography of an Image

In Hitler's Face Claudia Schmölders reverses the normal protocol of biography: instead of using visual representations as illustrations of a life, she takes visuality as her point of departure to track Adolf Hitler from his first arrival in Munich as a nattily dressed young man to his end in a Berlin bunker—and beyond.

Perhaps never before had the image of a political leader been so carefully engineered and manipulated, so broadly disseminated as was Hitler's in a new age of mechanical reproduction. There are no extant photographs of him visiting a concentration camp, or standing next to a corpse, or even with a gun in his hand. If contemporary caricatures spoke to the calamitous thoughts, projects, and actions of the man, officially sanctioned photographs, paintings, sculptures, and film overwhelmingly projected him as an impassioned orator or heroically isolated figure.

Schmölders demonstrates how the adulation of Hitler's face stands at the conjunction of one line stretching back to the eighteenth-century belief that character could be read in the contours of the head and another dating back to the late nineteenth-century quest to sanctify German greatness in a gallery of national heroes. In Nazi ideology, nationalism was conjoined to a forceful belief in the determinative power of physiognomy . The mad veneration of the idealized German face in all its various aspects, and the fanatical devotion to Hitler's face in particular, was but one component of a project that also encouraged the ceaseless contemplation of supposedly degenerate "Jewish" physical traits to advance its goals.

"With Hitler's Face, Claudia Schmölders has written an explosive book and delivered a thrilling contribution to physiognomy."—Suddeutsche Zeitung

"It contains fascinating insights into the mindset of the Twenties."—Ian Kershaw

"Despite the innumerable books devoted to Hitler's imposing presence and the Nazi dictatorship of the media, no single work has provided a comprehensive and focused study of the sights and sounds which allowed an otherwise unimpressive-looking individual to become a compelling site of attention and allegiance. This is precisely the project of Claudia Schmölders's significant book. She scrutinizes photographs, paintings, filmic representations, and verbal descriptions of the leader to 'read' these artifacts as texts. One might best describe her book as the history of a face and an image, the chronicle of its construction, transformation, and reception."—Eric Rentschler, Harvard University

"This is a work that can be read with profit by all those interested in the biography of Adolf Hitler and the mythology surrounding his person and image, as well as by those enticed by a biographical methodology that concentrates on the history of visual representations rather than on biographical 'facts.' This book, in short, well deserves the wider readership it will garner in English translation."—Biography