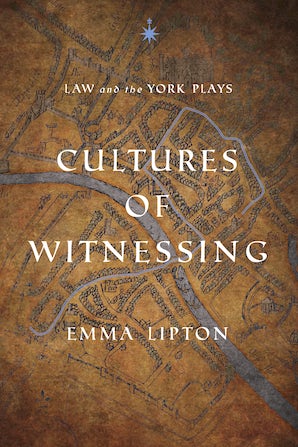 Law and the York Plays

Like other compilations of medieval urban drama, the plays that were performed in the streets of York on the Feast of Corpus Christi from the late fourteenth century until the third quarter of the sixteenth have most frequently been discussed in the context of the devotional cultures and practices of the later Middle Ages. The pageants' preoccupation with law, and with witnessing in particular, has received much less attention, Emma Lipton observes, yet the cycle of forty-seven plays, which together tell the story of human history from the Creation through the Last Judgment, contains an extended sequence that stages the trials of Christ leading up to the Crucifixion, and legal discourse features prominently elsewhere as well. While the play collections associated with other cities also engage with legal concepts, the York Plays devote an unusual amount of attention to the law, Lipton contends. It is no coincidence that the plays themselves are preserved alongside a wide range of legal records in the York Memorandum Books, repositories of civic documents that were kept in the city's guildhall.

Engaging both theater and legal studies, Lipton is concerned in particular with the interfaces in the York Plays between dramatic practice and legal concepts of witnessing. In medieval English courts, witnesses were defined as neighbors; they spoke both to what they had seen and heard and also to common knowledge of events. At the same time, many legal theorists were concerned by how the temporal gap between initial experience and testimony might reshape the record of the past in light of the motives and emotions of individual witnesses and allied groups. With chapters focusing on space, speech, affect, and temporality, Cultures of Witnessing considers how civic performance and the legal theory and practice of witnessing promoted a shared sense of urban citizenship, and how this in turn provides a way to theorize late medieval religious drama, whose players performed on the streets and neighborhoods in which they conducted their daily lives.

"Emma Lipton demonstrates that the legal theory of witnessing serves as both an agent of civic community and as a model of the drama itself. This is a highly original argument, and the critical payoff is large. It says something vital about the shape and form of these plays and their ways of testing out through witnessing the inherited biblical, festive, and liturgical narratives."—Sarah Beckwith, Duke University