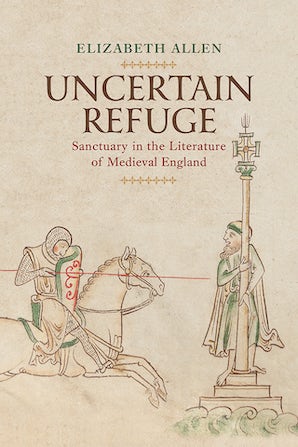 Sanctuary in the Literature of Medieval England

To seek sanctuary from persecution by entering a sacred space is an act of desperation, but also a symbolic endeavor: fugitives invoke divine presence to reach a precarious safe haven that imbues their lives with religious, social, or political significance. In medieval England, sanctuary was upheld under both canon and common law, and up to five hundred people sought sanctuary every year. What they found, however, was not so much a static refuge as a temporary respite from further action—confession and exile—or from further violence—jurisdictional conflict, harrying or starvation, a breaching of the sanctuary.

While sanctuary has usually been analyzed as part of legal history, in Uncertain Refuge Elizabeth Allen explores the symbolic consequences of sanctuary seeking in English literary works—miracle collections, chronicles, romances, and drama. She ponders the miracle of a stag's escape from the hunt into a churchyard as well as the account of a fallen political favorite who gains a sort of charisma as he takes sanctuary three times in succession; the figure of Sir Gawain, seeking refuge in a stark land far from the court and Robin Hood, hiding in his local forest refuge among his Merry Men. Her consideration of medieval sanctuary extends to its resonances in a seventeenth-century play about the early Tudor usurper Perkin Warbeck and even into modern America, with the case of a breach of sanctuary in southwest Georgia in 1963, when sheriffs took over a voter registration meeting in a local church.

Uncertain Refuge illuminates a fantasy of protection and its impermanence that animated late medieval literary culture, and one that remains poignantly alive, if no longer written into law, in today's troubled political world.

Note on Translation
Introduction. Medieval Sanctuary: Legal History and Symbolic Action 1
Chapter 1. The Miracle of Cuthbert's Stag
Chapter 2. The Flight of the King's Man: Hubert de Burgh in the Chronica Majora
Chapter 3. Breaches at Westminster and the Making of a Sanctuary King
Chapter 4. The Dark Sanctuary of Sir Gawain and the Green Knight
Chapter 5. Robin Hood and the Limits of Sanctuary
Chapter 6. Kingship and the Politics of Pity in the Histories of Perkin Warbeck
Coda. Sanctuary in Southwest Georgia, 1962
Notes
Bibliography
Index
Acknowledgments

"A splendid, exemplary, important book. Its erudition puts it on the same level as some of the field-transcending, encyclopedic work of medievalists of past generations. But its sense of the stakes of its argument, particularly its extended engagement with the urgency of sanctuary and care for the marginalized, make it a crucial book for this moment."—D. Vance Smith, Princeton University

"Elizabeth Allen's Uncertain Refuge is an important, indeed necessary, intervention in the scholarly conversation about medieval concepts of sanctuary and the power they continue to hold today. By considering its cultural meaning and power, Allen brings a substantially different perspective to sanctuary in medieval England than others, greatly deepening our understanding of its significance."—Shannon McSheffrey, Concordia University