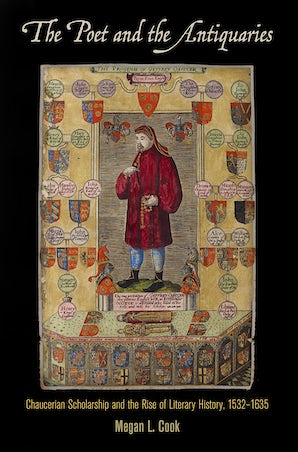 "One of the achievements of [Cook's] book is that it outlines the chronology of the developing Chaucer tradition while managing at the same time to differentiate its various elements with telling reference to printed and manuscript sources . . . Cook's survey of the early centuries of Chaucer reception gives a powerful sense of the ways in which he was co-opted in various conceptualizations of nation, language, faith and history."—The Times Literary Supplement

"This book has much to recommend it. It offers a lively treatment of the history of Chaucer's folios through the beginning of the seventeenth century, and will be indispensible to those who work with the English reception of medieval works in the Tudor period. It also demonstrates the extensive reach of antiquarian communities in the sixteenth and seventeenth centuries and suggests the existence of networks of textual exchange within England (and even outside of it) that were hitherto unguessed. Any scholar who deals with what Alice S. Miskimin famously called 'the Renaissance Chaucer' should have this book on their shelf."—Modern Philology

"[A] suggestive and sensitive book. It is also intensely readable in a way that does not compromise its rigor, as each chapter is written with a rare level of intellectual and stylistic fluency . . . Cook's central point [is] that 'Chaucer' is largely a product of specific audiences and their needs. As she demonstrates ably throughout this volume, the lingering idea of 'Chaucerian exceptionalism', and the 'untimeliness or temporal slipperiness' with which he is often credited, are conceptions that have their own histories, being leftover traces of his Tudor and Stuart readerships."—Journal of British Studies

"Considered in toto, Cook's book attractively illustrates how 'the medieval past is always shaped by its postmedieval interpreters.' She writes in a crisp, clear, and unpretentious style, which is easy to read. Her love of the specific shines through, driving analyses which are meticulous, copiously documented, and clearly structured. What Cook does is done superlatively well. Leaving one's audience asking for more is no bad thing."—Medium Ævum

"Elegantly written and meticulously documented, The Poet and the Antiquaries offers a genuinely new, original, and exciting intervention into the study of the reception, editorial, and reading history of Geoffrey Chaucer."—Siân Echard, University of British Columbia

"Megan L. Cook both synthesizes strands of current criticism and moves decisively beyond them. Bringing together book and manuscript history, reception studies, the history of the English language, detailed work on Chaucer as an authorial figure, and a sustained exploration of the developing editorial tradition and broader history of literary and cultural scholarship, she creates a fresh perspective on a very canonical figure's afterlife in a much-studied period."—Lucy Munro, King's College, London