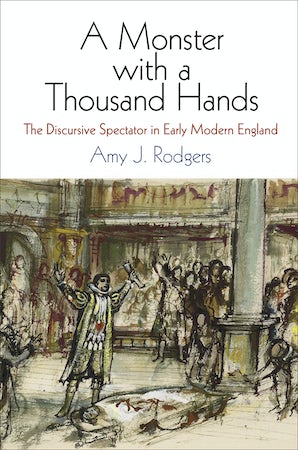 A Monster with a Thousand Hands

A Monster with a Thousand Hands makes visible a figure that has been largely overlooked in early modern scholarship on theater and audiences: the discursive spectator, an entity distinct from the actual bodies attending early modern English playhouses. Amy J. Rodgers demonstrates how the English commercial theater's rapid development and prosperity altered the lexicon for describing theatergoers and the processes of engagement that the theater was believed to cultivate. In turn, these changes influenced and produced a cultural projection—the spectator—a figure generated by social practices rather than a faithful recording of those who attended the theater. The early modern discursive spectator did not merely develop alongside the phenomenological one, but played as significant a role in shaping early modern viewers and viewing practices as did changes to staging technologies, exhibition practices, and generic experimentation.

While audience and film studies have theorized the spectator, these fields tend to focus on the role of twentieth-century media (film, television, and the computer) in producing mass-culture viewers. Such emphases lead to a misapprehension that the discursive spectator is modernity's creature. Fearing anachronism, early modern scholars have preferred demographic studies of audiences to theoretical engagements with the "effects" of spectatorship. While demographic work provides an invaluable snapshot, it cannot account for the ways that the spectator is as much an idea as a material presence. And, while a few studies pursue the dynamics that existed among author, text, and audience using critical tools sharpened by film studies, they tend to obscure how early modern culture understood the spectator. Rather than relying exclusively on historical or theoretical methodologies, A Monster with a Thousand Hands reframes spectatorship as a subject of inquiry shaped both by changes in entertainment technologies and the interaction of groups and individuals with different forms of cultural production.

"A brilliant, thoughtful, and innovative book. Writing lucidly and elegantly, Amy J. Rodgers establishes not only the possibility but also the necessity of our coming to understand the ways in which the notion of audience and spectatorship was conceptualized, discussed, and imagined during the early modern period."—Peter Holland, University of Notre Dame