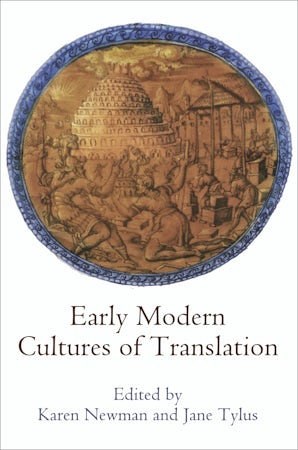 "Would there have been a Renaissance without translation?" Karen Newman and Jane Tylus ask in their Introduction to this wide-ranging group of essays on the uses of translation in an era formative for the modern age. The early modern period saw cross-cultural translation on a massive scale. Humanists negotiated status by means of their literary skills as translators of culturally prestigious Greek and Latin texts, as teachers of those same languages, and as purveyors of the new technologies for the dissemination of writing. Indeed, with the emergence of new vernaculars and new literatures came a sense of the necessary interactions of languages in a moment that can truly be defined as "after Babel."

As they take their starting point from a wide range of primary sources—the poems of Louise Labé, the first Catalan dictionary, early printed versions of the Ptolemy world map, the King James Bible, and Roger Williams's Key to the Language of America—the contributors to this volume provide a sense of the political, religious, and cultural stakes for translators, their patrons, and their readers. They also vividly show how the very instabilities engendered by unprecedented linguistic and technological change resulted in a far more capacious understanding of translation than what we have today.

A genuinely interdisciplinary volume, Early Modern Cultures of Translation looks both east and west while at the same time telling a story that continues to the present about the slow, uncertain rise of English as a major European and, eventually, world language.

"A strong collection that opens any number of important conversations."—Jonathan Goldberg, Emory University

"As the editors point out in their introduction, translation is crucial to early modernity in particular, and early modern translation is ill-understood. With this timely topic, the book will make a powerful contribution to the field."—Karla Mallette, University of Michigan