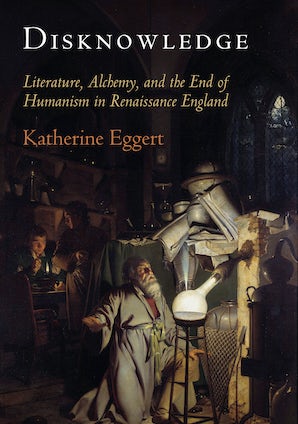 Literature, Alchemy, and the End of Humanism in Renaissance England

"Disknowledge": knowing something isn't true, but believing it anyway. In Disknowledge: Literature, Alchemy, and the End of Humanism in Renaissance England, Katherine Eggert explores the crumbling state of learning in the sixteenth and seventeenth centuries. Even as the shortcomings of Renaissance humanism became plain to see, many intellectuals of the age had little choice but to treat their familiar knowledge systems as though they still held. Humanism thus came to share the status of alchemy: a way of thinking simultaneously productive and suspect, reasonable and wrongheaded.

Covering a wide range of authors and topics, Disknowledge is the first book to analyze how English Renaissance literature employed alchemy to probe the nature and limits of learning. The concept of disknowledge—willfully adhering to something we know is wrong—resonates across literary and cultural studies as an urgent issue of our own era.

Introduction
Chapter 1. How to Sustain Humanism
Chapter 2. How to Forget Transubstantiation
Chapter 3. How to Skim Kabbalah
Chapter 4. How to Avoid Gynecology
Chapter 5. How to Make Fiction
Afterword

"Rich, detailed, subtle and bold. . . . Eggert is fully alive to the duplicity of alchemy and its claims."—Times Literary Supplement

"Eggert approaches her esoteric subjects with deep learning, masterful analysis, and exceptionally clear prose. Scrupulous but never sloppy, Disknowledge makes us think differently not just about the history of fiction making but also about the forms of unknowing at the heart of early modern knowledge systems. It provides a compelling account of a society that experienced acutely what she calls 'epistemological risk' in the face of new global flows of wealth and learning."—Modern Philology

"In this sharp and original book, Katherine Eggert takes on the challenge of characterizing knowledge formation in the period between early humanism and the rise of Baconian empiricism . . .Disknowledge, in Eggert's clever framework, has its own methodologies for impeding progress, including conscious forgetting, skimming texts, or treating relevant knowledge as immaterial."—Review of English Studies

"Katherine Eggert's Disknowledge breathes new life into a topic whose quirky fascination in early modern studies has foreclosed more nuanced ways of reading the specificities of its cultural potency . . . Eggert's analysis convincingly shows how the alchemical expressions of disknowledge may indeed 'model for modernity a kind of nimble epistemological and literary inventiveness' that imagines how looking backward may sometimes be the best way to move forward, but not without risk."—Studies in English Literature.

"Disknowledge's vigour and curiosity are inspiring . . . Eggert's line of argument is usually stringent, always erudite, and all the while tends to anticipate possible counterarguments . . . a valuable, rich and frequently thought-provoking addition to its field."—Early Modern Culture Online

"Disknowledge is a stimulating read, as this book challenges and provokes the reader to think deeply about what we as historians have come to know, and why, inviting response to Eggert's stated position from diverse disciplinary perspectives. As a scholarly resource, Disknowledge is an important and useful work for the ways in which Eggert sheds light on the inherent messiness of the state of learning during the sixteenth and seventeenth centuries . . . [A] significant work for opening up new ways to probe the project of knowledge-making in early modern England, and beyond."—Early Science and Medicine

"An unusually wide-ranging and original book, written with real stylistic flair. Eggert shows how alchemy, as both a discourse and a set of knowledge-practices, illuminates problems in many different domains, from transubstantiation to Kabbalah to debates over anatomy and reproduction. By using alchemy as a guiding thread, she reveals how each domain points up the limits of humanism in the early modern period. A delicately balanced, timely study that will be widely of interest to scholars of literature, science, medicine, and intellectual history more broadly."—Henry S. Turner, Rutgers University