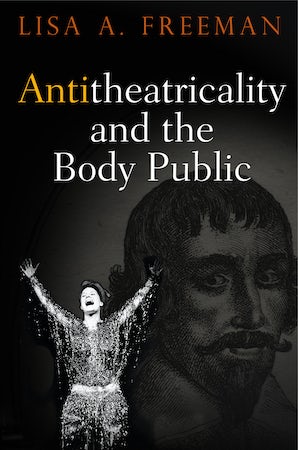 Antitheatricality and the Body Public

by Lisa A. Freeman

Situating the theater as a site of broad cultural movements and conflicts, Lisa A. Freeman asserts that antitheatrical incidents from the English Renaissance to present-day America provide us with occasions to trace major struggles over the nature and balance of power and political authority. In studies of William Prynne's Histrio-mastix (1633), Jeremy Collier's A Short View of the Immorality and Profaneness of the English Stage (1698), John Home's Douglas (1757), the burning of the theater at Richmond (1811), and the U.S. Supreme Court's decision in National Endowment for the Arts v. Finley (1998) Freeman engages in a careful examination of the political, religious, philosophical, literary, and dramatic contexts in which challenges to theatricality unfold. In so doing, she demonstrates that however differently "the public" might be defined in each epoch, what lies at the heart of antitheatrical disputes is a struggle over the character of the body politic that governs a nation and the bodies public that could be said to represent that nation.

By situating antitheatrical incidents as rich and interpretable cultural performances, Freeman seeks to account fully for the significance of these particular historical conflicts. She delineates when, why, and how anxieties about representation manifest themselves, and traces the actual politics that govern such ostensibly aesthetic and moral debates even today.

"Dazzlingly ambitious and meticulously researched. . . . [Antitheatricality and the Body Public] is a testament to the perspicacity of Freeman's thought that her ideas shed light not only on the theater as a key to understanding how societies have defined and debated their constituents in the near and distant past but also on how we might use the theater to think through the constitutional crises of the present and the future."—TDR: The Drama Review

"Lisa Freeman's rich study should take a privileged place alongside the most influential work in the field. . . . Antitheatricality and the Body Public should inspire any reader to pursue the reciprocity between theater and power modeled by her exemplary scholarship."—Theatre Journal

"It is, a bold-but certainly timely-move by Lisa Freeman to analyze antitheatricality anew. She delivers on this task with a thorough and thought-provoking investigation realized in a compelling series of case studies that demonstrate the pervasiveness of antitheatrical onslaughts across theater history. . . . A must-read for researchers working on any period of British or American theater."—Bulletin of the Comediantes

"This book's rigorous historicism and meticulous close readings are impressive, but more importantly, they are foundational to its theoretical reach and power. Freeman's premise that antitheatricality persistently calls on a 'body public,' a particular understanding of the ideal state that includes even as it excludes bodies, is a productive way to consider more than this book's five cases."—Eighteenth-Century Fiction

"As Lévi-Strauss said of cats, the theater 'is good to think with,' especially in moments of social stress and trauma, and Lisa A. Freeman demonstrates just how useful it can be in five meticulously researched case studies. Her book represents an impressive labor of research and writing, chock full of new material in every chapter."—Joseph Roach, Yale University

"A work of great erudition and scholarly merit that shows how antitheatrical rhetoric emerges as a way of mediating social, cultural, and governmental crisis. The result is a highly self-aware and remarkably original argument about the function of cultural regulation."—Daniel O'Quinn, University of Guelph