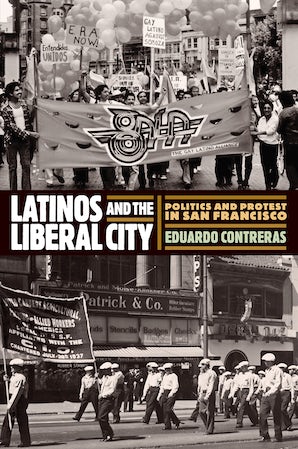 Latinos and the Liberal City

Politics and Protest in San Francisco

The "Latino vote" has become a mantra in political media, as journalists, pundits, and social scientists regularly weigh in on Latinos' loyalty to the Democratic Party and the significance of their electoral participation. But how and why did Latinos' liberal orientation take hold? What has this political inclination meant—and how has it unfolded—over time?

In Latinos and the Liberal City, Eduardo Contreras addresses these questions, offering a bold, textured, and inclusive interpretation of the nature and character of Latino politics in America's shifting social and cultural landscape. Contreras argues that Latinos' political life and aspirations have been marked by diversity and contestation yet consistently influenced by the ideologies of liberalism and latinidad: while the principles of activist government, social reform, freedom, and progress sustained liberalism, latinidad came to rest on promoting unity and commonality among Latinos.

Contreras centers this compelling narrative on San Francisco—America's liberal city par excellence—examining the role of its Latino communities in local politics from the 1930s to the 1970s. By the early twentieth century, San Francisco's residents of Latin American ancestry traced their heritage to nations including Mexico, Puerto Rico, Nicaragua, El Salvador, Chile, and Peru. These communities formed part of the New Deal coalition, defended workers' rights with gusto, and joined the crusade for racial equality decades before the 1960s. In the mid- to late postwar era, Latinos expanded claims for recognition and inclusion while participating in movements and campaigns for socioeconomic advancement, female autonomy, gay liberation, and rent control. Latinos and the Liberal City makes clear that the local public sphere nurtured Latinos' political subjectivities and that their politicization contributed to the vibrancy of San Francisco's political culture.

"Latinos and the Liberal City is an excellent book, exceedingly well written, persuasively argued, and exhaustively researched. It is a welcome addition to Latino/a history, western history, the history of labor activism, urban history, and other fields...By focusing on trade unionism, feminism, gay rights, and other subjects, [Contreras] has gone far in explaining the liberality of San Francisco as something that Latino/as helped construct. And by bringing all these things together, he has produced a unique and important work."—American Historical Review

"Latinos and the Liberal City is a richly textured history of Latino labor and community organizing in San Francisco from the 1930s to the 1970s. On the cutting edge of the rapidly expanding field of Latino urban history, Eduardo Contreras reveals decades of activism and protest that the historiography barely suggests. By placing Latinos at the center of the city's political history, Contreras allows us to see how generations of Latinos understood and attempted to shape the economic, social, and political systems around them...Latinos and the Liberal City is essential reading for scholars of urban history, political history, and Latinx studies."—Journal of American History

"Latinos and the Liberal City by Eduardo Contreras is a well-researched, thoughtful, and ambitious exploration of twentieth-century grassroots Latino activism in San Francisco...Contreras successfully argues that Latinos' engagement with liberalism in its different forms (New Deal, Great Society, civil rights and cultural) over the course of the twentieth century led to the construction of latinidad."—Pacific Historical Review

"Contreras’s work has great importance in the fields of labor history, urban history, gender history, Latinx history, and many other subareas. His work refines our understanding of the roles of varying notions of liberalism and latinidad in motivating Latino political engagement from the 1930s through the 1980s. Without a doubt, Contreras demonstrates that San Francisco Latinos were politically active and helped shape this bastion of liberalism throughout the twentieth century through advocacy in arenas of labor, civil rights, government aid, and cultural politics."—Journal of Arizona History

"Eduardo Contreras tells an analytically sophisticated and archivally rich story of San Francisco and its Latino populations and traces in novel ways their engagement with the ideals and failures of twentieth-century democratic liberalism. This book will quickly become a standard bearer in the growing canon of Latino history."—Lorrin Thomas, Rutgers University-Camden

"Latinos and the Liberal City makes an original contribution to urban history, labor history, civil rights history, political history, and ethnic studies by successfully addressing the question of how the men and women of a diverse Latino population engaged with American liberalism as they encountered it in the San Francisco Bay area from the early 1930s to the late 1970s. This pathbreaking study is the first book to detail the distinctive ways in which Latino San Franciscans made themselves part of the liberal project in California during this important era in American political culture."—William Issel, San Francisco State University